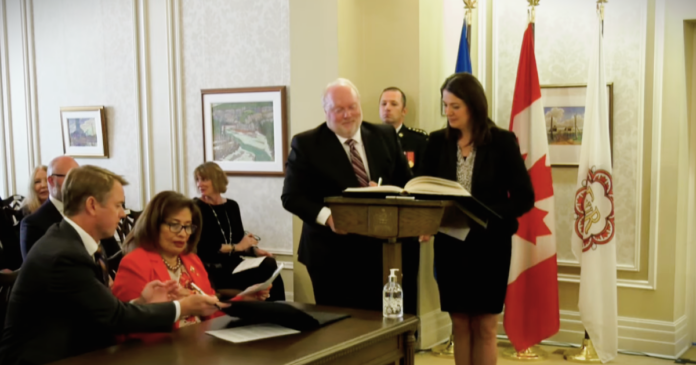 Danielle Smith has been sworn in as Alberta’s 19th premier.

In a ceremony at the Government House in Edmonton on Tuesday, Smith promised to protect Albertans’ rights and freedoms which she said have been tested over the last two years.

“Like any Albertan, I’ve always believed that freedom is foundational,” Smith said.

“I will ensure as head of this government that those rights are protected and will never be taken for granted again.”

Smith has said the proposed law — which would bar federal bills deemed harmful to Alberta and its interests — will be her first piece of legislation once the government returns from summer recess.

Speaking Tuesday, Smith reiterated her promises to protect Alberta’s areas of provincial jurisdiction and invited other provinces to partner with Alberta to make Canada “the most prosperous and free country on earth.”

“Together, we can be the solution to the world’s energy security crisis, provide affordable energy to those in need, and do so while providing the most environmentally responsible energy to our fellow Canadians and our friends and allies around the world,” she said.

Before introducing any such legislation in the Alberta Legislative Assembly, Smith first needs a seat in the House. She will run in the Brooks – Medicine Hat byelection after UCP MLA Michaela Frey resigned on Friday and encouraged Smith to take her seat. The electoral-district is a Conservative safe-seat.

A general election against the Alberta NDP also looms overhead. Smith will face Rachel Notley in spring 2023. She already said she won’t call an early election.

Already, Notley has begun positioning herself against the new premier and is reaching out to voters who don’t feel represented by a Danielle Smith government.

Notley said Albertans interested in strong healthcare, jobs and opportunities, and who are tired of the “division and the drama” can turn to the NDP.

“An Alberta NDP government will be stable, responsible and focused on delivering results for you and for your family,” she wrote on Twitter.

Smith’s remarks on Tuesday also promised to protect Alberta’s most vulnerable during the cost of living crisis. She noted the mental health crisis and the help needed for those living on the streets.

“We also have heart and compassion that matches the size of our mountains,” she said. “Our generous compassion is the very soul of Alberta, and Albertans demand a government that reflects that compassion — especially in these times.”