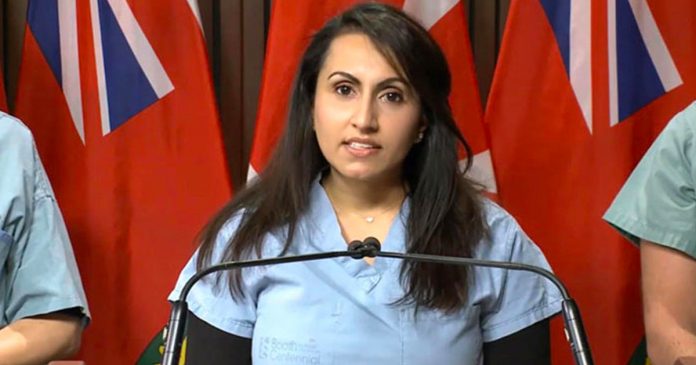 An Ontario doctor is challenging a professional censure placed on her record by the College of Physicians and Surgeons (CPSO) after she took to social media to warn against the harms of Covid lockdowns.

The Democracy Fund (TDF) and Libertas Law lawyer Lisa Bildy are representing Dr. Kulvinder Kaur Gill. Dr. Gill will appear before the Health Professionals Appeal and Review Board (HPARB) to request that the cautions against her record be scrubbed.

In a TDF press release, Dr. Gill claims that she was the subject of a malicious online campaign due to her advocacy on Twitter against lockdowns.

Dr. Gill argued there was a lack of scientific justification for the lockdowns, often supporting her reasoning by sharing scientific studies.

Dr. Gill’s tweets – “If you have not yet figured out that we don’t need a vaccine, you are not paying attention,” and “There is absolutely no medical or scientific reason for this prolonged, harmful and illogical lockdown. #FactsNotFear” – ultimately led the CPSO to censure Dr. Gill.

The CPSO found that Dr. Gill’s statements did not align with the government’s messaging on vaccines and lockdowns, dismissing her concerns as “misinformed and misleading.”

CPSO cited China and South Korea’s pandemic responses as “evidence that lockdowns can and did work in reducing the spread of Covid-19” and “to state otherwise is misinformed and misleading and furthermore an irresponsible statement to make on social media during a pandemic.”

“It was unreasonable for the CPSO to insist that doctors’ comments align with the government,” said lawyer Lisa Bildy.

“The College’s duty is not to the government, but rather to the public, and those interests are not necessarily aligned.”

According to TDF, Dr. Gill is expected to appear before the HPARB on October 12, 2022.

Paperwork rules take away time doctors could be spending with patients,...