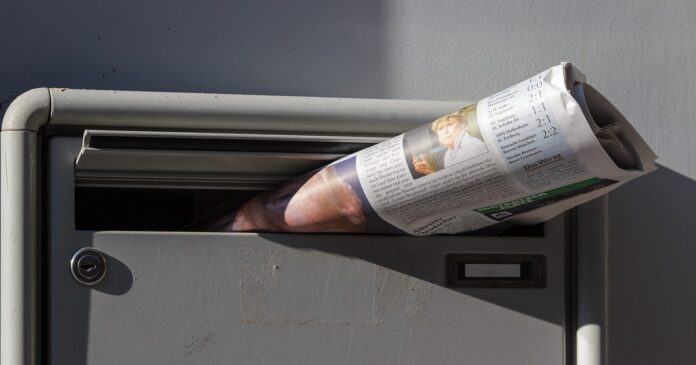 National Newspaper Week came to a close this past Saturday, as print-form newspapers continue to predictably die all around us.

Soon there will have to be an obituary.

It used to be, before the Internet began changing the world with its “information superhighway,” that newspapers were licences to print money—filled with flyers mid-week which advertised and produced coupons for weekend grocery shopping and had its classified ads at the back which promoted yard sales.

In the middle was the news.

They would arrive at your door with a thud.

Today newspapers are as thin as carpaccio, with their death notices being a prime reason for their continued existence among the aging and diminishing Boomer Generation spawned by the joys associated with the end of the Second World War.

The Millennials, meanwhile, glued endlessly to their uber-important smartphones, wouldn’t be caught dead with an old-fashioned newspaper in their possession.

It would be too humiliating.

In virtually every newspaper across Canada, however, half-page ads were run preaching why National Newspaper Week should be supported.

The text never varied. “Newspapers are an essential part of Canadian culture, communities and democracies, delivering vital information to Canadians each and every day while connecting local communities from coast-to-coast-to-coast,” the ads read.

“It’s hard to express just how important local independent journalism is to our country, which is why we come together each year to celebrate and honour our local news media providers during National Newspaper Week.”

Nowadays, it’s the tech-savvy youth who are primarily responsible for undoing the anachronistic tradition of buying a printed newspaper.

But is also the case of the old dogs in the industry failing to learn any new tricks to curb the downward spiral of newspapers.

Here’s a look at the at the top five reasons via Listverse why not all traditions are timeless, and particularly why the newspaper industry is failing.

1.   It’s made by and aimed at old people. Most successful business models do not rely on a client base who remember when things used to cost a nickel. Not only do newspapers adopt poorly to the Internet model, they also seem to be completely clueless about what appeals to younger demographics.

2.   There’s a lack of passion. There is rarely any narrative beyond the regurgitation of what is one the tape recorded, with to attempt to go beyond the who, where, what, when, why and how,

3.   There’s no journalism in the journalism. “What should matter most is how much a story resonates with us as humans, not so much as how a story appeals to our lowest instincts to draw us in,” Listverse writes. In other words, it shouldn’t appeal just to those on the “inside of the slant.”

4.   It’s impractical and inconvenient. The internet is just easier, especially when it comes to archival searches. Per Listverse, who wants to “dig through a compost pile of newspapers to ascertain a news story from last year”?

5.   It costs money. As the old adage goes, why pay for something that’s free? The paper industry is like the music industry in this regard. Like pirated music, news is very much available for free on the internet, largely from websites pertaining to major city newspapers.

It should be no surprise then that the newspaper industry has shed more than half its jobs since 1990 when the internet first reared its head, losses which have only been partly offset by gains in online media.

It is no wonder, therefore, the need for an annual National Newspaper Week across North America.

The industry may be grasping at straws, but straws are all it has.