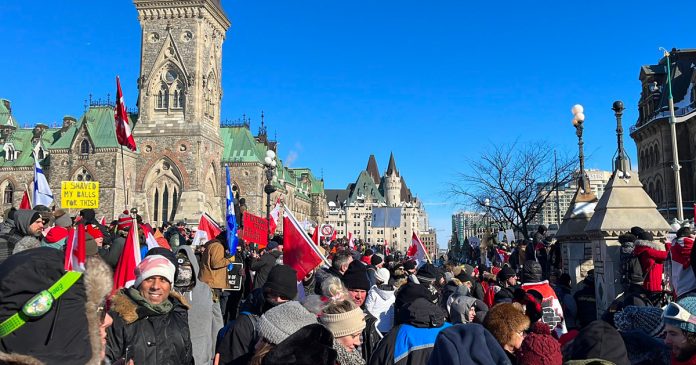 Public Safety Canada officials admitted in internal updates that the Freedom Convoy protests were peaceful and that no violence was taking place despite claims by the Minister Marco Mendicino.

According to Blacklock’s Reporter, daily reports described the demonstrations as peaceful, undisruptive and stable.

“The Freedom Convoy so far has been peaceful and cooperative with police,” an internal memo stated on Jan. 27.

Up until Feb. 11, officials monitoring the situation stated that there were “no major incidents,” that “no violence took place,” that “disruption to government activities” was minor, that “there (were) minimal people” on Parliament Hill, and that the “situation (remained) stable and planning” was ongoing.

“Since most government employees are working remotely, the disruption to government activities is so far minor. There is currently no known end time for the demonstrations,” the report states.

In contrast, key Liberal cabinet members including Mendicino and Prime Minister Justin Trudeau sought to paint the protestors as violent and even rapists.

“We cannot allow illegal and dangerous activities to continue,” said Trudeau. “Occupying streets, harassing people, breaking the law, this is not a peaceful protest.”

Mendocino said on Feb. 16 that “cases of violence” were at the centre of the movement, without any substantiating evidence.

“At the core of the movement is anger, animosity and in far too many cases violence,” claimed Mendicino.

At a House of Commons Public Safety Committee meeting in February, Mendocino also stated that Ottawa residents received “threats of rape” from convoy members. To this day, no reports of rape threats have been produced by the Liberals.

“There were Ottawans who were subjected to intimidation, harassment, threats of rape,” said Mendicino.

When he was pressed further on the allegation, the minister claimed that the “absence of criminal charges doesn’t mean it doesn’t happen.”
Mendocino is among over 60 witnesses called to testify before the Public Order Emergency Commission investigating the Liberal government’s use of the Emergencies Act to quash peaceful Freedom Convoy protestors.