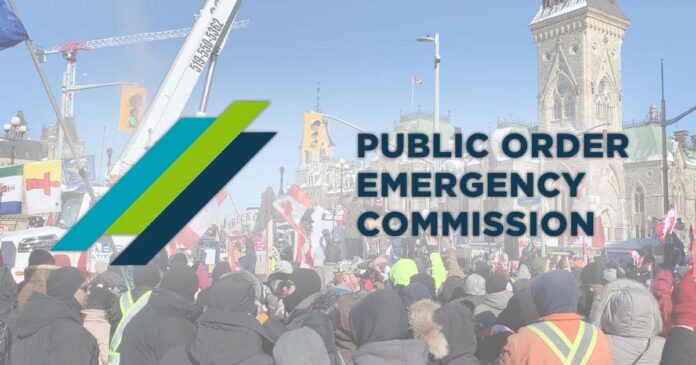 On Day 1 of the Public Order Emergency Commission hearings, lawyers representing various parties given standing by the Commission made their introductory remarks to Commissioner Paul Rouleau.

Rouleau began the day with his own introductory remarks outlining how public commissions work and to describe to the viewing public what they can expect to see over the next month and a half.

Rouleau described the Commission’s process as an exercise in “fact-finding”.

“Uncovering the truth is an important goal. When difficult events occur that affect the lives of Canadians, the public has a right to know what has happened,” Rouleau said.

Rouleau also prefaced the day’s proceedings by outlining what public commissions cannot do such as determining whether individuals have committed crimes.

Public commissions “do not make findings of legal liability, they do not determine whether individuals have committed crimes. While inquiries seek to uncover the truth, they are not trials,” Rouleau said.

Rouleau described the Commission’s mandate as emanating from “the public’s legitimate right to know why the government proclaimed an emergency and whether the actions it took were appropriate.”

In describing the mandate given to the commission by the federal cabinet, the Commissioner described that mandate in five sections: 1) To examine first the evolution and goals of the convoy movement and border protests and their leadership organization and participants. 2) The impact of foreign and domestic funding. 3) The impact, role and sources of misinformation and disinformation. 4) The economic impact of blockades. 5) The efforts of police and other responders prior to and after the declaration.

Rouleau said that it is the mandate given to them by parliament “that drives our work.”

Lawyers representing parties given standing by the commission were then called on to make their opening arguments.

Introductions began with the co-lead counsel representing the Government of Canada, Robert MacKinnnon. “The evidence will show that the invocation of the Emergencies Act was a reasonable, and necessary decision given the escalating, volatile and urgent circumstances across the country,” MacKinnon said.

“The government witnesses will outline the deliberate, step-by-step process in which careful consideration was given to all the available options which led to the declaration of a public order emergency as a matter of last resort.”

Brendan Miller, counsel to Freedom Corp., an organization representing the protesters in Ottawa slammed the government’s decision in his opening remarks.

“The Emergencies Act is the successor to the discredited War Measures act which was abused during the FLQ crisis in Quebec.”

“From our perspective, the government did not meet the requisite legal grounds to invoke a Public Order Emergency,” Honner said. “(T)he extraordinary measures that the government invoked were therefore inappropriate and indeed, outside their jurisdiction.”

After opening remarks were presented, counsel representing the commission submitted three “overview reports” as evidence. The first was an overview of the Covid-19 pandemic in Canada and public health restrictions implemented by different levels of government across Canada. The second was an overview of prior protests leading up to the pandemic and legal challenges of public health measures and the final overview report was a “timeline of certain key events leading up to the invocation of the Emergencies Act.”

Witness testimony is scheduled to begin tomorrow morning at 9:30 am ET. Members of the Ottawa City Council are expected to testify.