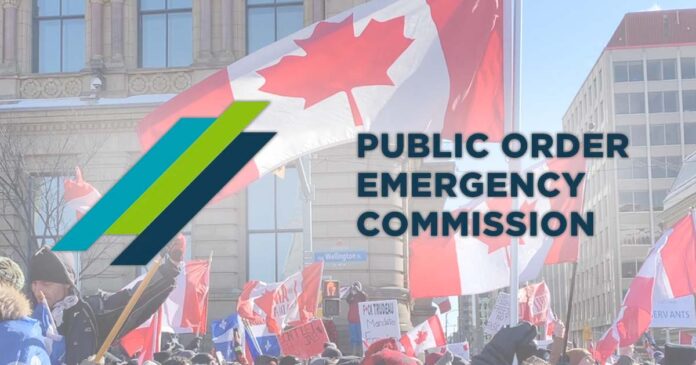 On Day 2 of the Public Order Emergency Commission hearings, Ottawa residents testified about “phantom honking” and living in a scene from “The Purge” as city councillors accused truckers of committing “microaggressions” toward Ottawa residents.

Zexi Li, a 22 year-old Ottawa resident and federal government employee testified that living in Ottawa during the Freedom Convoy was “something like living in ‘The Purge’,” making reference to the horror movie series in which a fictional United States enters a 12-hour state of lawlessness in which rape and murder are legal.

“I just remember feeling like it was such a surreal sight. It almost felt like you were in something like ‘The Purge’,” Li said. “Though I didn’t often see direct acts of violence, there was a certain chaos on the streets, and that feeling of chaos gradually increased as things progressed.”

Under cross-examination from Freedom Convoy lawyer Brendan Miller, Li was challenged on her comments.

Li responded by saying, “I would not say that the protests or occupation provided a Purge-like opportunity.” She followed up by saying the opportunity was there for a Purge-type scenario and that the people “illegally occupying our streets felt like they could do anything they wanted.”

Miller also asked Li about her interactions with the protesters, including an interaction in which Li allegedly told truckers to “go back to where the f*** you came from.” Li confirmed that she “may have” said those words.

Prior to admitting that she had confronted the protesters by cursing at them, Li told Commission counsel that protesters targeted her when she “chose not to engage with them.”

“The worst thing was that when I chose not to engage with the protesters they would blast their horns at me with a smile and then cheer in unison. They would take joy in my flinching and recoiling from the noise,” Li said.

The only violence described in Li’s testimony today were alleged actions from people living in Li’s apartment building throwing eggs at the truckers from their balconies.

“Egg throwing started to occur from my building,” Li said. This was described by Li as her neighbours’ “little act of retaliation” toward the peaceful truckers.

Li was the lead plaintiff in a successful injunction application to get protesting truckers to stop honking horns late at night near the beginning of the Ottawa protests.

Testifying alongside Li was Victoria De La Ronde, also a resident of downtown Ottawa and a former federal government employee.

Under questioning from Commission counsel, De La Ronde claimed that due to the honking from protesters in February, she still hears “phantom honking” and is “triggered by the sound of horns.”

McHale testified that many businesses operating in downtown Ottawa during the protests voluntarily closed their doors so as not to be fined by the City of Ottawa for not following public health guidelines.

Carrier testified that UberEats had stopped operating in downtown Ottawa during the protest.

In response, Twitter users began sharing pictures of UberEats receipts taken from the time of the convoy protests in downtown Ottawa.

The final two witnesses of the day were Ottawa city councillors Mathieu Fleury and Catherine McKenney.

“For us, having the physical truck on the street created a big weapon,” Fleury claimed.

“There were a number of microaggressions…particularly in residential communities.”

Fleury claimed that as a francophone, he would only be able to describe the “nuance” of the word “microaggressions” in French.

McKenney, who is running for mayor and uses they/them pronouns, was unable to provide any evidence of particular acts of violence that had occurred during the protests and claims only to have heard about them.

This contradicts a public statement issued by McKenney during the protests that Ottawa residents were facing “unprecedented violence” and that residents had been “terrorized.”

The commission hearings resume on Monday, October 17 at 9:30am ET.

True North will continue to bring you daily coverage of the Public Order Emergency Commission hearings.