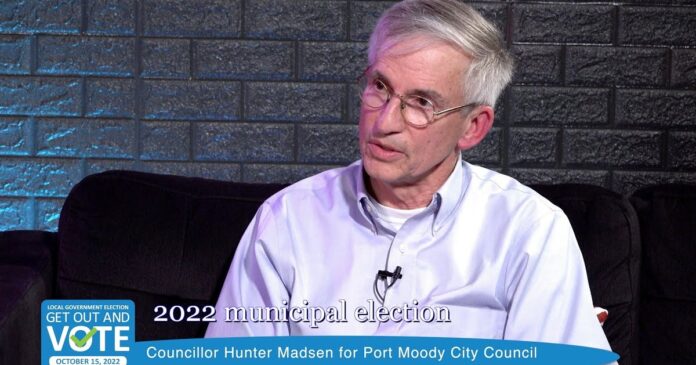 Port Moody incumbent city council candidate Hunter Madsen co-authored a controversial book about the gay community that mused about the ancient Greek practice of sexual relationships between older men and boys aged “sixteen or so” as ideal and a form of “family structure.”

The renowned book titled After the Ball: How America Will Conquer Its Fear and Hatred of Gays in the ‘90s was published in 1989 by Madsen, who was then an advertising executive, alongside neuropsychologist Marshall Kirk.

While Madsen and Kirk don’t encourage pederasty in the book, explicitly stating that the “authors grant nothing of the sort” when it comes to ethically approving of pederasty, several troubling sections ambiguously gloss over the abuse adult-child sexual relations result in without unequivocally denouncing it.

In a section titled Back to Plato: A Modest Proposal to Resurrect the “Traditional Gay Family”, Madsen and Kirk outline the “ancient Greek model” of a “explicitly sexual love” between “an attractive boy – of, say, sixteen or so” known in Greek as an eromenos (beloved) and an “older, presumably more mature and established, man” known as an erastes (adult lover.)

The authors make sure to add that “for nutritional reasons, (puberty) occurred much later in those days than it does now.”

“Something like this, suitably updated (that is, without the wife and kids), is what we tentatively recommend as a new ideal for gay men – a family structure of their own,” writes Madsen and Kirk.

True North reached out to Madsen for comment and an opportunity to clarify his views on the subject but did not receive a response by the time this article was published.  It is unclear whether or not he continues to hold these same controversial views since they were published in his book. Madsen is currently running to be re-elected to council. Voters are set to go to the polls on Oct. 15.

Madsen has also used the pseudonym “Erastes Pill” (referencing the adult male in the relationship described above) in publications before, including an essay co-authored with Kirk titled “The Overhauling of Straight America.”

One section of the book preceding the chapter on ancient attitudes towards homosexuality, includes a set of rules “for relations with straights.”

“If I’m a Pederast or a Sadomasochist, I’ll Keep It Under Wraps, and Out of Gay Pride Marches,” wrote the authors.

Earlier in the book, Madsen and Kirk discuss pedophilia further, stating that allowing pedophilia activism into gay pride marches was an “unalloyed disaster” from a public relations perspective and go on to demand that pedophilia advocates “please keep a low profile.”

“We’re not judging you, but others do, and very harshly; please keep a low profile. You offend the public more than other gays,” write Madsen and Kirk.

Madsen and Kirk cynically explain that it “is irrelevant whether pederasty is good or bad” while stating they “grant nothing of the sort” when it comes to approval, for them the issue of its advocacy is a public relations one that’s harmful for how people view the LGBT community.