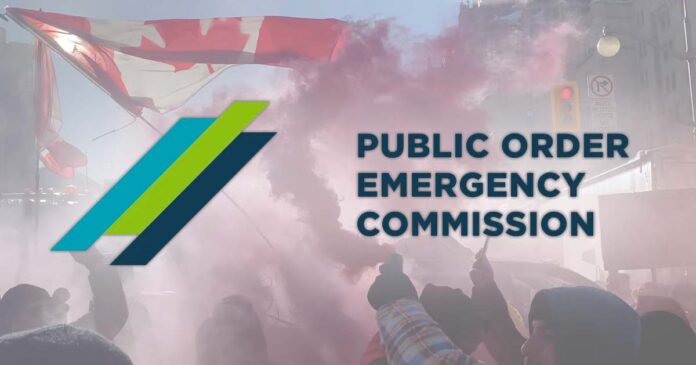 On Day 3 of the Emergencies Act hearings, City of Ottawa officials testified that federal Parliamentary Protective Service officers blocked efforts from “good faith” convoy leaders in moving trucks out of residential neighbourhoods and onto Wellington Street.

Both Kanellakos and Arpin made it clear to Commissioner Rouleau that there was ongoing communication between convoy organizers and municipal officials prior to the federal government’s decision to invoke the Emergencies Act. Both city officials also made it clear that negotiations were being conducted by Convoy leadership “in good faith.”

Kanellakos, told the Commission that Ottawa police supported the agreement between the city and the convoy to move trucks out of residential areas and onto Wellington St.

“There was no other place to put the trucks,” Kanellakos said. “The discussion (with protest organizers) was that we wanted to reduce the footprint in the area, to get them out of the neighbourhoods.”

The most explosive evidence given by Kanellakos today came under questioning from Convoy lawyer Brendan Miller when asked why the deal reached by Convoy leadership and the city had fallen through.

In a text exchange with Convoy lawyer Keith Wilson during the protest, Kanellakos expressed regret that the deal to move trucks out of residential areas and onto Wellington Street was being blocked by the federal Parliamentary Protective Service (PPS) and Ottawa Police Service (OPS).

Kanellakos recalls telling Wilson at the time that he was “disappointed we couldn’t move more trucks out of the neighbourhood.” Kanellakos also revealed that he wasn’t sure if it was the OPS or the PPS that blocked the movement, but the resignation of then-Ottawa Police Chief Peter Sloly that day got in the way of the agreed-upon movement.

Kanellakos also revealed under questioning from Commission counsel that the Ford government was not present during “tripartite meetings” between the City of Ottawa, federal government, and Ontario officials on how to deal with the protests.

Kanellakos said that the Ford government’s response was to leave it up to law enforcement and not have elected officials involved in enforcement strategy.

When asked today at a press conference why he isn’t testifying at the Emergencies Act inquiry, Doug Ford – standing beside Justin Trudeau – said he wasn’t asked by the Commission to testify.

“I was never asked to testify,” Ford said. “Our police did an incredible job. They were very peaceful, they moved forward and I am so proud to stand here and back our police.”

Considerable time was also spent during Kanellakos’ testimony on the city’s challenge to hire tow truck operators to help clear rigs from the city.

Kanellakos told Commission counsel that some tow truck operators were concerned for their own safety and potential equipment damage. Other operators had business concerns as they often work alongside big rig trucks.

Testifying after Kanellakos the Ottawa mayor’s chief of staff, Arpin.

Arpin described the desire from Convoy leadership to assist the city in managing the protest and to begin moving trucks as “not a stunt.”

“We would know very quickly if this was a stunt or a bluff (by Convoy leadership) to try and gain more time, and we found out that it wasn’t a stunt,” Arpin said.

Arpin’s text communications with senior officials from the offices of ministers Bill Blair and Marco Mendicino were parsed through line-by-line by Commission counsel and Convoy lawyers.

In a scathing text message from Arpin to Bill Blair’s Chief of Staff, Arpin took aim at the feds’ decision to “denigrate the demonstrators” at press conferences while the city is trying to negotiate with them.

Aprin’s testimony also made it clear that senior members of the federal government including Mendicino and Blair were aware of negotiations taking place with Convoy leadership just one day prior to Justin Trudeau invoking the never-before-used Emergencies Act.

Arpin also accused the RCMP of “lying” in a text exchange with Mendicino’s Chief of Staff when asked how many RCMP officers were deployed to assist the OPS.

“They are lying to you flat out,” Arpin wrote.

Kanellakos shut down a claim from Paul Champ, the lawyer representing the ‘Ottawa Coalition’ – a group of residents and businesses opposing the protesters – that fire trucks were unable to respond to an incident in the Chateau Laurier.

“We heard about one incident at the Chateau Laurier that fire trucks couldn’t get to them. You are aware of that?” Champ asked Kanellakos.

“That’s actually not true,” Kanellakos responded to audible laughter from the room. “We have contingency built in for all of our emergency operations.”

Ottawa mayor Jim Watson and city councillor and former chair of the Ottawa Police Services Board Diane Deans are expected to testify tomorrow.

The hearings resume tomorrow at 9:30 am ET.

True North will continue to bring you daily coverage of the Emergencies Act hearings.