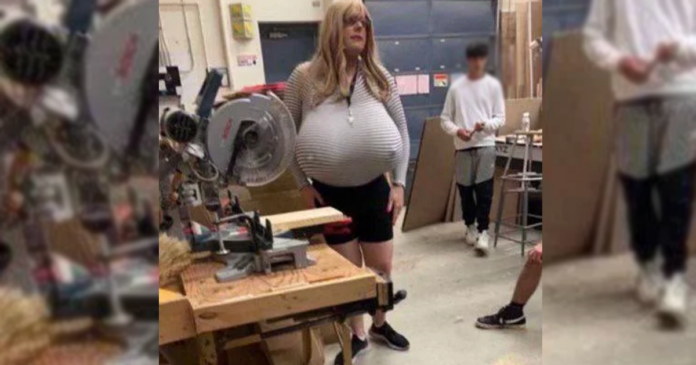 The Ontario College of Teachers, which licenses and regulates the province’s educators, says it’s reviewing professional standards amid a controversy involving a transgender Oakville teacher who wears enormous  prosthetic breasts to class.

Amid the outrage over the teacher’s conduct, Ontario’s education minister Stephen Lecce told the media that he had requested that the College review its professional standards.

“In this province, in our schools, we celebrate our differences and we also believe that there must be the highest standards of professionalism in front of our kids,” said Lecce.

“And on that basis, I’ve asked the Ontario College of Teachers to review and to consider strengthening those provisions with respect to professional conduct which we think would be in the interest of all kids in Ontario,” he added.

Last week, the College told the National Post it is reviewing its professional standards in compliance with the provincial directive.

“The College has been reviewing its professional standards in response to Minister Lecce’s request. We will provide our response to the Minister when it is ready,” college spokesperson Andrew Fifield told the outlet.

“Per the Minister’s request, we are reviewing the supports and guidance the College provides to members with respect to teacher professionalism.”

The College expects to share the results of their review with Lecce this month, but told the National Post that it is unable to comment on specific teachers, schools or school boards.

It should be noted that while the regulatory body is not in charge of school boards, it does have ethical standards for teachers to follow and can suspend or revoke teaching licenses.

The Halton District School Board, which oversees the Oakville school, does have a dress code banning the wearing of “clothing that exposes or makes visible genitals and nipples”.

However, the board has said the policy only applies to students and not teachers.

The school declined the National Post’s request for new information on the matter, and referred the outlet to the board.

In a written statement to the outlet, Halton school board spokesperson Heather Francey said “the (board) has received significant attention online and in the news over the past few weeks.”

She added that the board “continues to handle this matter in a way that stays true to our values and commitment to Human Rights, respects the privacy and dignity of our students and staff, and with the safety and well-being of students and staff as our highest priority.”

“While we understand the desire for information by the public, we will not and cannot publicly discuss any matter that identifies our staff directly or indirectly. We trust the public will understand the parameters that guide us.”

The National Post says Lecce’s office did not return their questions in time for publication and they were unable to get a hold of the teacher.

In addition to online criticism and memes, protests against the teacher were organized in Oakville and several petitions were started.

Rebel News personality David Menzies made headlines this week after he showed up to deliver his outlet’s petition at a Halton school board meeting – dressed up as the Oakville teacher.