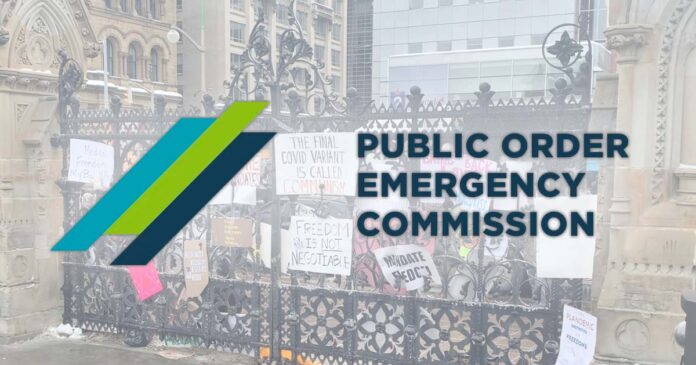 Ottawa mayor Jim Watson told the Public Order Emergency Commission that neither he nor the City of Ottawa requested the invocation of the Emergencies Act.

He was neither consulted on nor advised of the federal government’s intention of using the unprecedented measure, he said.

Watson and manager of Ottawa emergency services Kim Ayotte were the only two City of Ottawa officials to testify today.

While Watson didn’t ask for the Emergencies Act, he said he “very much supported” it afterwards.

“No one had raised the Emergencies Act with us,” Watson said. “When it was invoked and I was briefed on what its powers were, I thought this was a very positive step to getting this resolved once and for all.”

When asked about negotiations with Freedom Convoy leaders prior to the invocation of the Emergencies Act, Watson testified that he “couldn’t negotiate with these people (Convoy leaders) rationally.”

Convoy lawyer Brendan Miller pressed Watson on that accusation given that Watson had sent a detailed letter to Tamara Lich outlining the conditions that the protesters would need to meet in order to have a meeting with the mayor, and that members of his staff had been negotiating with Convoy leadership “in good faith.”

Watson ultimately agreed that the truckers held up their end of the deal to move trucks away from residential areas onto Wellington St.

Questions from Commission counsel were focused on that same deal reached by the city and Convoy leadership. In particular, Commission counsel wanted to build on revelations from city manager Steve Kanellakos yesterday that the Ottawa Police Service and the Parliamentary Protective Service reneged on the agreement.

Watson testified that his understanding was that it was the invocation of the Emergencies Act that was the reason for trucks being blocked from leaving.

A text conversation between Ayotte and convoy organizer confirmed that Barber had managed to relocate 40 big rig trucks out of residential neighbourhoods and onto Wellington St. the previous night and that protesters planned to move more trucks that day.

Later that same day, Trudeau invoked the never-before-used Emergencies Act and police blocked all truck movement out of residential neighbourhoods, which caused the deal with the city to fall through.

A read out of a phone conversation between Prime Minister Justin Trudeau and Watson at the time of the protests confirmed Watson held very negative feelings about the Canadians protesting in his city.

Watson referred to the protesters on the call with Trudeau as “vulgar” and “hateful” and told Trudeau that he “can’t reason with them”, accusing the protesters of “ripping masks off people.”

Watson also told Trudeau that he felt he was dealing with “The Republican Party down South.”

When asked by Alan Honner, the litigation director at The Democracy Fund, if he personally saw protesters ripping masks off residents, Watson said he had only heard about such incidents from media reports.

It was also revealed today that both Trudeau and Watson were upset with Ontario Premier Doug Ford for not engaging in tripartite meetings between the city, the province and the federal government.

Trudeau said to Watson, “Doug Ford has been hiding from his responsibility,” accusing him of not engaging “for political reasons.”

Watson, in describing his frustration with Ford, told Trudeau, “It’s like a three legged stool. If you only have two legs on it, it’s not that sturdy. You need all three.”

Watson also accused one protester of coming from New Brunswick “with guns in his trunk” to shoot him.

This testimony from Watson – which accuses a protester of having guns at the Ottawa protest – has been debunked numerous times by law enforcement officials on the ground since the invocation of the Emergencies Act.

Interim Ottawa Police Chief Steve Bell told the House of Commons national security committee that no firearms were discovered at the Freedom Convoy and no firearms-related charges had been laid.

Under questioning from counsel representing the Government of Canada, Ayotte was asked about a false bomb threat sent in to CHEO, the Ottawa children’s hospital.

“Do you have any evidence that that bomb threat was connected to the Convoy,” government lawyers asked Ayotte. “No”, he responded.

Ayotte wrapped up his testimony by clearing up the “confusion” around the situation regarding the Chateau Laurier and the inability for firetrucks to respond to a specific emergency incident at the hotel. Ayotte described this situation as being “overblown” and that three trucks were able to access the hotel without issue and only one fire truck was unable to get to the hotel.