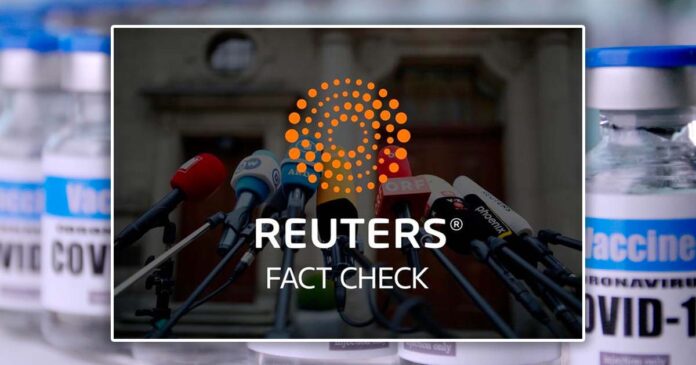 A viral video with over 2 million views posted by True North featuring a Pfizer executive admitting that the vaccine manufacturer never tested their covid vaccine on stopping transmission of the virus is among several posts that were recently “fact-checked” by Reuters and marked as “misleading”.

But, based on online reaction, Reuter’s has stumbled at its attempt, which is in turn being portrayed as misleading.

In an October 10 hearing in the European Parliament, Dutch MEP Rob Roos asked Pfizer’s President of Developed Markets Janine Small if Pfizer had tested the vaccine on stopping transmission of the virus before entering the European market.

“Was the Pfizer Covid vaccine tested on stopping the transmission of the virus before it entered the market. If not, please say it clearly. If yes, are you willing to share the data with this committee?” Roos asked.

“Regarding the question around ‘did we know about stopping the (transmission) before it entered the market?’ No. We had to really move at the speed of science,” Small told the European parliament.

True North posted the video to Twitter and it quickly went viral on the platform, gaining more than 2 million views before Reuters stepped in to fact-check the widely circulated clip.

MEP Rob Roos described the testimony from Small in his own video posted to Twitter as “shocking”, “scandalous” and “criminal.”

The Associated Press also fact-checked the viral video as “missing context”, claiming, “Pfizer never claimed to have studied the issue before the vaccine’s market release.”

Internet users began responding to the Reuters fact check on Twitter with clips of Pfizer CEO Albert Bourla – and tweets from Pfizer’s official Twitter account – implying in some cases that the vaccine stops transmission and in other cases outright stating it.

In a tweet posted by Pfizer’s official account on Jan. 13, 2021, the vaccine manufacturer wrote “the ability to vaccinate at speed to gain herd immunity and stop transmission is our highest priority.”

Pfizer CEO Alberta Bourla, while speaking at the World Economic Forum in 2022 told the audience,  “you vaccinate not only for yourself, you vaccinate also to protect society, in particular those that you love the most.”

Below is a compilation of Bourla appearing on television repeating the claim that the Pfizer vaccine prevents transmission of the virus.

Reuters’ assertion that Pfizer never claimed that their original submissions to regulators did include tests for transmission appears to be accurate. But their own fact check is misleading because it entirely ignores the fact that political and public discussions about the vaccines were often driven by the incorrect assumption that the vaccines would halt transmission.

Reuters does not appear to have ever fact-checked any of the many public figures who repeatedly claimed that the vaccine was going to stop transmission.

In a 2021 campaign speech, Justin Trudeau told a crowd, “if you don’t want to get vaccinated, that’s your choice. But don’t think you can get on a plane or train beside vaccinated people and put them at risk.”

“We know that the way to get through this as well is to make sure that people who go into non-essential business feel safe that they’re not going to catch Covid from someone next to them,” Trudeau told reporters in the summer of 2021.

Trudeau also told reporters at the House of Commons that Members of Parliament can’t be “vectors of transmission” in justifying a vaccine mandate placed on MPs.

In a French-language interview with a Quebec-based television show, Justin Trudeau said of unvaccinated Canadians, “They are extremists who don’t believe in science, they’re often misogynists, also often racists. It’s a small group that muscles in, and we have to make a choice in terms of leaders, in terms of the country. Do we tolerate these people?”

In a CNN town hall, US President Joe Biden told Americans, “you’re not going to get covid if you have these vaccinations.”

Below is a compilation of prominent American figures repeating the claim, which was contradicted by the Pfizer executive last week.

Paperwork rules take away time doctors could be spending with patients,...