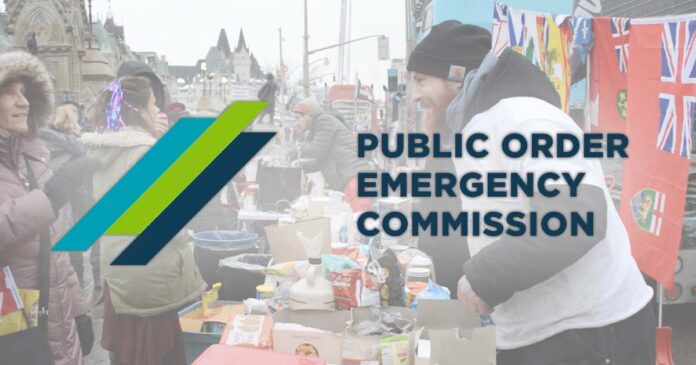 Miller continued to press Morris, whose job it was for the force to lead the intelligence-gathering effort of the OPP, on the lack of evidence that must be met in order for the government to be justified in declaring a national emergency and invoking the Act.

“I saw online rhetoric, I saw information on social media, I saw assertions of that type of activity. I’m aware of no intelligence that was produced that would support concern in that regard,” Morris responded.

Miller then asked: “You didn’t see any evidence in the intelligence of activities within or relating to Canada directed toward or in support of a threat or use of acts of serious violence against property for the purpose of achieving a political, religious or ideological objective within Canada or in a foreign state?”

Morris answered: “In relation to the things you’re discussing, we collected all the information which some information asserted attempts at that. We did see that and had to consider that. Did we have any credible evidence that that would occur? No.”

Miller then asked Morris if it was possible that federal intelligence agencies would withhold intelligence from the OPP.

“I believe that I would’ve been informed,” Morris said. “I received no information in relation to the probability of that activity.”

You can watch the entirety of Convoy lawyer Brendan Miller’s cross examination of Pat Morris below.

An email written by Morris was examined under questioning from Cara Zwibel, counsel for the Canadian Civil Liberties Association, in which it states that the Integrated National Security Enforcement Team (INSET) – which is lead by the RCMP – reported that the protests in Ottawa and at the Ambassador Bridge did not meet their threshold for a threat to national security.

In that same email, Morris appears frustrated at political leaders, questioning them on the source of their information regarding “extremist involvement” in the convoy.

Morris also made numerous claims throughout his testimony which contradict many media reports surrounding the criminal behaviour of protesters in Ottawa and around reporting that protesters were armed.

Morris dismissed concerns that protesters were armed in Ottawa as “hyperbole”, saying “we produced no intelligence to indicate that these individuals (protesters) would be armed. There has been a lot of hyperbole about that,” Morris said under questioning from Commission counsel.

Commission counsel spent considerable time probing OPP intelligence collected on the convoy prior to January 28th – the day that protesters arrived in Ottawa.

“There was almost no reported criminal activity of any of this activity coming across Canada,” Morris said under questioning from Commission counsel. “So it was conspicuous for the absolute lack of criminal activity.”

When questioned by Ottawa Police counsel, Morris told the commission that “open fires”, “honking” and “ideological fringe elements” were not considered threats by the OPP intelligence bureau.

Morris also testified to the extent with which OPP spies were embedded inside the protests to collect intelligence on the “mood, tenor and plans” of the protesters.

Although Morris testified that the protests never reached the OPP’s threshold of a threat to national security, the protests in intelligence reports were labelled a potential threat to national security in part because, as is written in an OPP intelligence report, the “threat to [Canada’s] reputation by virtue of coverage in the international media of what was transpiring in Canada.”

Former Chair of the Ottawa Police Services Board (OPSB) Diane Deans testified in the morning, prior to Morris’ cross examination.

Deans’ testimony spent considerable time on her involvement in the resignation of former police chief Peter Sloly and her eventual resignation from the board as Chair.

Deans went on to accuse Ottawa mayor Jim Watson of using the protest as an opportunity to “settle some old scores” against her.

A recording of a phone call between Deans and Mayor Watson was admitted to the Commission as evidence. In it, Deans asks Watson if council will move a motion of no-confidence in her as Chair of the OPSB and if Watson planned to vote against her. Watson said in the conversation he wasn’t sure.

You can listen to the entire phone conversation between Deans and Watson below.

Craig Abrams and Carson Pardy of the OPP and Patricia Ferguson of the Ottawa Police Service are still to testify this week.