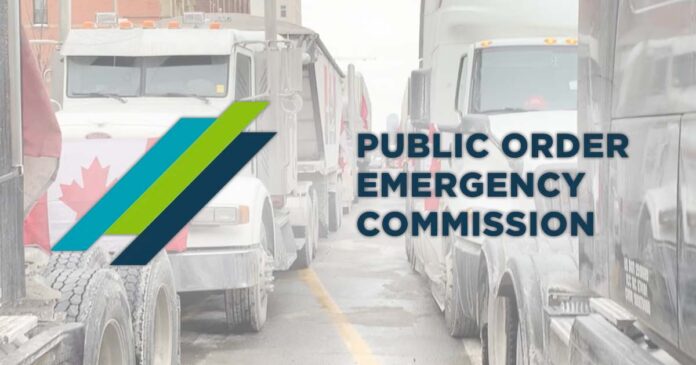 Tow trucks were already on their way to assist in the clearing of downtown Ottawa prior to the invocation of the Emergencies Act, Acting Deputy Chief of Ottawa Police Service Patricia Ferguson revealed at Thursday’s Emergencies Act inquiry hearings.

Both Ferguson and Ontario Provincial Police (OPP) superintendent Craig Abrams testified to a breakdown of trust between liaison teams and convoy organizers throughout the protest.

Ferguson said of the Act invocation that it “greased the wheels” for the police to move the protesters out and that it gave law enforcement more “confidence” to do their jobs but that Ottawa police had tow truck drivers already on their way.

Justice Centre for Constitutional Freedoms lawyer Rob Kittredge pressed Ferguson on the other aspects of the Act’s invocation which allow out of jurisdiction police officers to enforce the law without being sworn in. Ferguson answered that given how tow truck drivers were already on their way, the invocation of the act really only saved hours of bureaucratic work by side stepping the requirement to have officers sworn in.

Asked by Commission counsel if there was any coordination between enforcement teams and police liaison teams (PLT) on the ground during the protest, Ferguson said that police negotiators were “caught entirely off guard” when enforcement and arrests began taking place.

Ferguson described the negotiations between police and convoy leadership as a “win-lose scenario” and that the truckers were given a directive that if they left, they would be let go by the cops.

Commissioner Paul Rouleau asked Ferguson when exactly Ottawa police concluded that the Freedom Convoy protest went from being a protest to an “occupation.”

“Was there any discussion or thought given to how to allow the protest to continue in some form? It seems like it was from black to white. It was a protest until the end of the day Sunday but now it’s an occupation. Do you understand what I’m trying to get at?” Rouleau asked Ferguson.

“I’m not sure if there was any conversation about that,” Feruson responded. “I know from a command and strategic level it was that they’re here and they’re entrenched and they’re not leaving, so that is where it switched from a protest to an occupation.”

Commission counsel asked both Ferguson and Abrams about the Coventry Road section of the protest and how PLT negotiators were used in that area of Ottawa. Protest leaders used a parking lot outside of the downtown core to act as a logistical hub to coordinate the transportation of resources like food, water and fuel to protesters in the downtown core.

Abrams spoke to an incident prior to the invocation of the Act in which Ottawa PLT and OPP PLT teams were making breakthroughs to get shipments of fuel from Coventry Road to truckers on Wellington St. stopped. However, upon agreeing to let protesters drive away from Ottawa and not deliver the fuel, Ottawa cops, without coordinating with PLT teams, pulled the protesters over and charged them.

Abrams accused the Ottawa police enforcement leader of knowing about successful negotiations taking place at Coventry, but “decided to use it as an enforcement opportunity.”

“That caused extreme stress between the PLT team, both Ottawa Police Service and OPP PLT members, to the point where Ottawa police PLT members said, ‘you folks, you should go home. We’ve lost. We’ve lost any goodwill we were able to reach with some of the convoy organizers,” Abrams testified.

Under questioning from counsel representing the Ottawa Coalition, a group of businesses and residents opposed to the convoy, as to why trucks were allowed into the city of Ottawa, Ferguson spoke to former police Chief Sloly’s insistence that Charter Rights be upheld and that protesters were allowed to access downtown Ottawa to protest peacefully.

Speaking to the arrival of trucks into Ottawa, Abrams called it a “success”, echoing previous testimony given by law enforcement officials to the lack of criminal behaviour from the protesters and the overall peacefulness of the truckers prior to entering Ottawa.

“Overall we had no assaults. No criminality. They kept a lane of traffic open. They did what they said they would do. Didn’t damage any highways. It was a success getting them into the city of Ottawa,” Abrams said.

The commission also heard Thursday of how Abrams wrote an email to his senior officers in the OPP about a call that Sloly coordinated with OPS officers, telling them that he would request twice as many out of jurisdiction officers as is required to end the protests based on recommendations from OPS officers on the ground.

Abrams described the call  as “strange”, saying: “He’s asking about doubling the ask he’s requesting from other police agencies in Ontario to support what’s happening in Ottawa with no plan. There’s no plan to plug these numbers into yet. These were just random numbers.”

Abrams will be cross examined by counsel of the various parties given standing by the Commission and OPP officer Carson Pardy is also scheduled to testify.