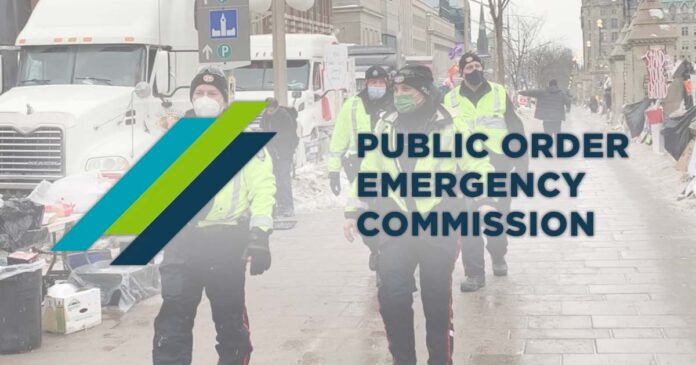 Officers “did not need the Emergencies Act”, according to a prominent Ontario Provincial Police (OPP) officer, who testified Friday on day 7 of the hearings into the controversial use of the Act.

Chief Superintendent Carson Pardy, who was one of the most senior law enforcement officers involved in the effort during the Freedom Convoy, told Commission lawyers that the Emergencies Act invocation wasn’t required to tow vehicles and that existing police strategies in place prior to invoking the act would have been sufficient to clear the protests within the same time period.

Commission lawyer Frank Au asked Pardy, “In your view, was there a police solution to the demonstration?”

“There was a solution and we reached that solution,” Pardy said. “We had some help with the Emergencies Act but in my humble opinion we would have reached the same conclusion with the plan that we had without (the Act).”

Counsel representing the Saskatchewan government also pressed Pardy on his signing off on an operational plan to clear the protesters from Ottawa without requiring the powers given to law enforcement in the Act.

“When you signed off on that plan you were confident that it could be implemented to end the occupation?” Saskatchewan counsel asked. “That February 13th plan did not contemplate any powers under the federal Emergencies Act, correct?”

Pardy confirmed that the operations plan – which was also signed off by the RCMP and the OPS – did not involve Emergencies Act powers and could be implemented without the invocation of the act.

OPP Supt. Dan Abrams was cross examined earlier today by lawyers representing various groups given standing by the Commission before Pardy was called to testify.

Democracy Fund lawyer Alan Honner asked Abrams if the sharp increase of OPP officers deployed to Ottawa prior to and immediately after the invocation of the Act was caused by the Act or if it was going to happen regardless of whether Justin Trudeau took the last resort measures.

Abrams agreed with Honner that the officer deployment would’ve happened “in any event” and that the increase in officers on the ground from the OPP was “directly related to what we know was an operational plan with the public order team that needed extra support.”

Lawyers representing the Government of Canada aimed to extract testimony from Abrams that would indicate that the excessive force used by officers to crack down on the protesters in Ottawa didn’t result in “death or bodily injury” to any of the protesters.

Van den Berg at the end of cross examination of Abrams asked him about whether any officers involved in physical altercations with protesters submitted required “use-of-force reports” in order to document physical engagement with protesters.

“Were any use-of-force reports completed after the major operations after the invocation of the Emergencies Act?” Van Den Berg asked Abrams.

You can watch the entirety of convoy lawyer Van Den Berg’s cross examination of OPP Supt. Dan Abrams below.

Scheduled to testify next week is former Ottawa police chief Peter Sloly and acting Ottawa police chief Steve Bell along with the Commissioner of the OPP Thomas Carrique and other high ranking law enforcement officials from both the OPS and the OPP.