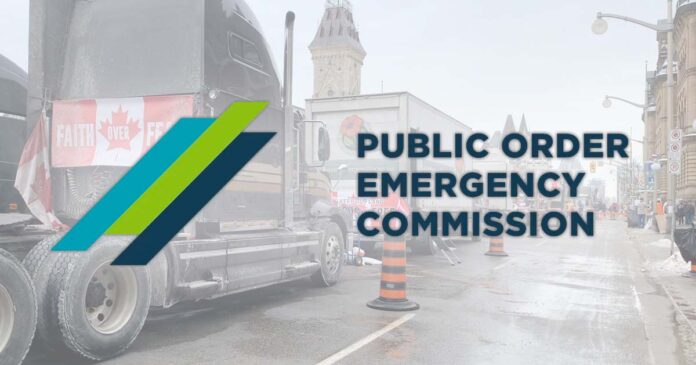 While being questioned from Convoy lawyer Brendan Miller, Bell told the commission that although the Emergencies Act “created a stable platform” for Ottawa police, there was a plan and it was ready to be executed without the never-before-used Act.

“So you’re saying that there were existing laws that you could’ve done the same thing under, is that right?” Miller asked Bell.

Bell responded: “We had a plan. We were going to execute that plan.”

Bell’s testimony echoes the same testimony given by retired Ontario Provincial Police (OPP) Chief Superintendent Carson Pardy who told Commission counsel on Friday that the OPP had a plan without the Emergencies Act to clear the protesters.

Miller pressed Bell on his accusations of “violence” and highlighted the fact that no evidence to date has emerged of any physical acts of violence from protesters toward Ottawa residents, despite multiple acts of violence inflicted on protesters from law enforcement.

“Is it fair to say that when you use the phrase ‘violence’, you’re not describing any form of physical assault, are you?” Miller asked Bell.

“Physical assaults contribute to what I’m describing. I was specifically describing the violence that our community felt as a result of the culmination of actions that the occupiers engaged in,” said Bell.

“So the violence that they felt, not actual violence, is that what you’re saying?” Miller questioned.

“That is correct, not the criminal code definition of violence,” Bell responded.

Bell also went on to confirm that the so-called violence he was describing which included “trucks blaring horns” and “trucks running 24/7” was not technically violence as it relates to the criminal code.

Miller also questioned the interim chief on the actions of out of jurisdiction riot cops who arrested demonstrators en masse in downtown Ottawa and drove them to a rural parking lot in the middle of winter without access to a car or a phone to call their lawyers.

Bell claimed that he was unaware of the conditions that met protesters who were arrested and hauled out of the city.

“So I don’t know what the logistics at the building were. I’d imagine it would’ve needed to have a phone so you could call your lawyers,” Bell responded.

Under questioning from Commission counsel, Bell described the behaviour of the convoy participants prior to arriving in Ottawa as “extremely lawful” and he testified to the fact that convoy leadership had “peaceful” and “lawful intentions” when they arrived in Ottawa.

“Their behaviour as it’s described within the intelligence reports was that they were extremely lawful. There was no anti-social behaviour that they were engaged in,” Bell said. “Beyond that, the organizers clearly stated on many occasions that their intention was to be lawful and peaceful once they came to our city.”

Bell also testified that during the first weekend of the Freedom Convoy in Ottawa, intelligence reports indicated to Ottawa police that there was a “low threat of violence” from the convoy protesters.

Despite claims from local residents that Rideau Hall – the home of Canada’s Governor General – may be under attack by Freedom Convoy supporters, Bell confirmed that no such threat existed in any intelligence provided to the Ottawa police.

“There were no threats made against Rideau Hall,” Bell confirmed for the commission.

The Commission had previously sent multiple requests to both Ford and Jones but they were continually rejected. As a result, the Commission formally summoned them to Ottawa.

Last week, Premier Ford claimed he “wasn’t asked to testify” and that he “stood shoulder-to-shoulder” with Prime Minister Justin Trudeau on his unprecedented decision to invoke the Emergencies Act.

The Commission’s letter to the premier contradicts Ford’s claim.

“On September 19, 2022, Commission counsel requested an interview with [Ford and Jones]. This request was refused,” the letter reads.

“As of last week, the invitation to attend to testify before the Commission has been declined ‘for the moment.’”

Senior representatives from the OPP and the Ottawa Police Service are scheduled to testify this week including former Ottawa police chief Peter Sloly who resigned during the Freedom Convoy.