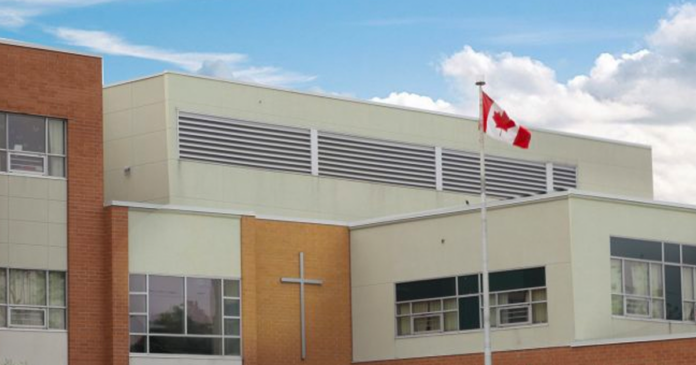 Students at some schools across Canada have received a newsletter handout that praises the federal Liberal government’s proposed dental plan as a “reason to smile” and reads largely like a policy advertisement.

The handout doesn’t sit well with the parent of one student from St. Gregory’s Elementary School in Etobicoke, Ontario, who forwarded the document to True North. “This is irritating. My child just came home with this. Who approves this content for Grade 8 students in Ontario?” said the parent, who Truth North has agreed to not identify.

Although the Toronto Catholic District School Board (TCDSB) defends the document and says it isn’t about advocacy.

The newsletter is titled What in the World: Level 2 and is issued by the educational publishing organization LesPlan for use by Canadian students in grades eight through ten.

The first page of the relevant section is largely praiseworthy, describing the dental legislation – which still has to be passed in Parliament – in glowing terms. It quotes NDP leader Jagmeet Singh saying “it will improve the well-being of those with limited incomes” and that “it is a matter of dignity.” It then references an activist who says “the expansion can’t come soon enough”.

“The proposal is the result of a joint effort between the Liberals and the New Democratic Party (NDP). The NDP has agreed to support the Liberal minority government when it introduces social initiatives such as this,” the newsletter claims.

“How much will all this cost Canadians? An estimated $938 million over the initial two-year period, the government says. But this is just the first stage of a much broader $5.3-billion dental care initiative, if all goes as planned.”

But while some parents may not appreciate the tone of the document, the TCDSB says the handout doesn’t violate any of their policies.

“Distribution of political content is not permitted on Toronto Catholic District School Board (TCDSB) properties,” the TCDSB Communications Department told True North, noting that the lesson was handed out in a media studies course.

“The lesson plan is not a political advocacy piece as the information in the lesson clearly states the dental plan is a proposal, and includes comments raised by stakeholders such as the Leader of His Majesty’s Official Opposition, the Parliamentary Budget Office (PBO), and the Ontario Dental Association (ODA).”

While the whole first page speaks of the proposal in only glowing terms, a second page of content includes criticism from Conservative leader Pierre Poilievre.

Canadian Taxpayers Federation Federal Director Franco Terrazzano told True North that the Liberal-NDP dental scheme was a “costly and unfunded program” and that the newsletter made no mention that Ontario students would be on hook for the costs.

“The Trudeau government’s dental scheme is a costly and unfunded program. The government continues to spend buckets of cash on nearly everything under the sun, which is driving up the cost of living,” said Terrazzano in an emailed statement.

“We noticed there’s nothing in that report that shows each Ontario student is on the hook for about $60,000 in government debt.”