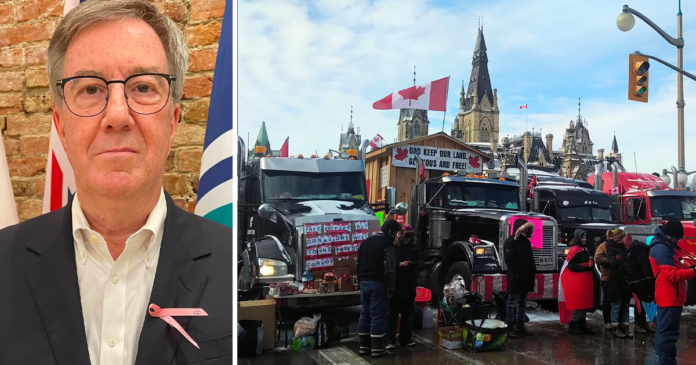 Days after Ottawa Mayor Jim Watson mused about seizing and selling trucks towed from the convoy protest, the City of Ottawa’s lawyer stepped in to say it wasn’t possible.

A Feb. 24 memo from city solicitor David White to Watson and Ottawa city councillors said the city has “no existing legal authority” to permanently seize people’s trucks, regardless of the reason.

“It is my considered view that there is no existing legal authority by which the City could lawfully take possession of the vehicles seized by police for the purposes of sale or disposal by the City,” White wrote in the confidential memo, which has been included in documents submitted by the City of Ottawa to the Public Order Emergency Commission.

On Feb. 20, Watson said in a CTV interview that the City of Ottawa should recoup policing costs by selling off the dozens of vehicles it towed from the so-called Red Zone in downtown Ottawa.

A memo from the City of Ottawa’s lawyer to Mayor Jim Watson said there is “no existing legal authority” for the city of Ottawa to seize and sell the vehicles it towed from the so-called Red Zone.

“How can we take possession of all of those trucks that have been towed away? How can we confiscate those and sell those trucks to help pay for some of our costs?,” Watson asked. “I don’t think the taxpayers of Ottawa should be paying for this multi-million dollar bill that we’re going to be saddled with because of the irresponsibility and the illegal activities of a bunch of truckers and others who showed little regard for our community and its people.”

Policing the three-week-long protest earlier this year cost the Ottawa Police Service $35 million, though this was later reimbursed by the federal government.

Watson’s proposal prompted an analysis by White on the “authority to seize and sell vehicles,” which he concluded does not exist.

Downtown Ottawa was cleared by police over a two-day operation Feb. 18 and 19 this year. Owners and operators were able to retrieve towed vehicles from an impound lot a week later, Feb. 26.

White noted that police are able to obtain a court order to retain property for use at trial, but this authority does not allow for the property to be sold.

Similarly, the Ontario attorney general could pursue seizure under civil forfeiture laws, but this would also require a court application and could not be initiated by the City of Ottawa.

“In light of the above, unless the continued detention of the property can be justified by police pursuant to the relevant provisions of the Criminal Code of Canada and/or the Provincial Offences Act and/or the Attorney General steps in with an application under the Civil Remedies Act, the law requires that the property be returned to its owner,” White advised Watson.

White said if a vehicle was not retrieved from the impound lot there were mechanisms available for the city to sell it, but the proceeds would have to be paid to the owner and could not be put towards the police service budget.