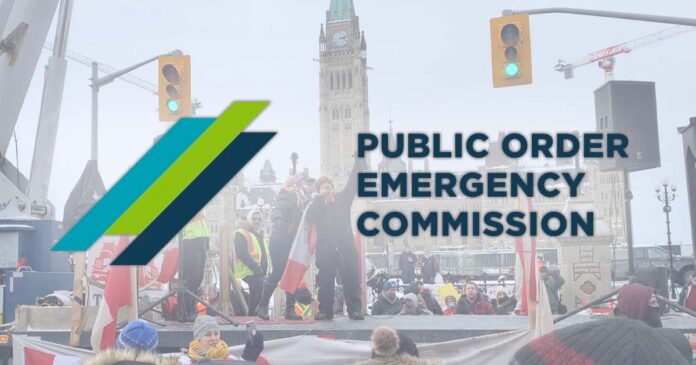 Under questioning from Justice Centre for Constitutional Freedoms lawyer Rob Kittredge, Ottawa Police Service (OPS) Superintendent Robert Bernier, who was tasked as the incident commander for the Freedom Convoy, said that the Emergencies Act was not required to tow vehicles and that officers would have been able to clear the protests without the act.

“Would you agree that the federal emergency power to compel towing services may have been helpful to police but it wasn’t necessary for police to clear the protests, was it?” Kittredge asked.

“Yes, however with the caveat that we were having challenges, we were having a hard time up until the 13th of February,” Bernier said. “As things materialized on the 13th I was satisfied we were good.”

OPS acting Deputy Chief Patricia Ferguson testified last week that on February 13, tow trucks were en route to Ottawa to clear the protesters prior to the invocation of the Emergencies Act.

Kittredge then asked Bernier if he agreed with Interim Ottawa police Chief Steve Bell’s Monday testimony that the police were going to clear the protesters without the act. Bernier agreed.

“Numerous other OPP and OPS witnesses have testified that the emergency powers may have been helpful to police in various ways but they were not necessary. Would you agree with that?” Kittredge continued.

Bernier continued to provide evidence to the fact that the Emergencies Act wasn’t required when facing questions from the Canadian Civil Liberties Association (CCLA) today.

In reference to a February 13th plan drawn up by law enforcement officials to clear protesters without Emergencies Act powers, CCLA counsel asked Bernier if that plan required any additional legal powers which would have come from the Act.

“Was it your assessment that the OPS had the necessary legal tools and powers to execute that operational plan?” CCLA counsel asked Bernier.

Bernier agreed and when asked if he thought the OPS required any additional legal powers, Bernier said that the emergency powers were “beneficial, but to say ‘necessary’, I would say no.”

“At no time prior to February 14th did you indicate to any of your superiors that you require any additional legal tools or legal powers?” CCLA counsel asked.

“That is correct,” Bernier responded.

“The plan that I was developing was based on existing authorities whether it be under the provincial, federal or common law authority to act,” Bernier said. “I was satisfied that we were going to have all the authorities we would need to take action.”

Commission lawyers asked Bernier about the successful arrangements made by Ottawa police to secure the tow trucks prior to invocation of the act. Ottawa police officials had previously testified that 36 tow trucks were on their way to Ottawa and ready to move trucks under existing authorities. Bernier’s testimony confirmed that fact.

Commission lawyer Frank Au asked Bernier, “In terms of the arrangements to secure tow trucks, were those arrangements made before or after the [invocation of Emergencies Act]?.”

“Majority of the arrangements were all done by the 13th because they were in transit to Ottawa,” Bernier said. “To my knowledge we did not have to adopt any processes under the Emergencies Act to comel any of them to follow through on their actions.”

Bernier was questioned by Commission lawyers and convoy lawyers on the use of force employed by riot cops on February 18th when public order enforcement action began taking place.

Bernier leveled the blame of the well-documented aggression from riot cops on the “aggressive” and “volatile crowd” of protesters that faced them in front of the Chateau Laurier.

Bernier said, “we had to make some decisions to increase our usage of force in order to protect ourselves and properly deal with the situation at hand.”

Convoy lawyer Bath-Sheba Van Den Berg showed Bernier a video of a protester who was hauled behind officer lines and was laying on the ground being beaten with a rifle.

“Do you agree that the OPS officer in this video in the back behind the line is using what is actually the muzzle and not the butt of what looks like a 40mm chemical munition launch to beat a protester with?”

Bernier repeatedly refused to answer the question, defending the actions of the police that day saying there was “not enough for me to see what’s going on.”

Ontario Premier Doug Ford faced questions from the Ontario NDP today in Question Period as to why he is challenging a summons to testify in front of the commission.

An NDP MPP asked the Premier in question period, “We haven’t heard a word from either the Premier or the former Solicitor General. Hiding the problem does not make it go away. I ask the Premier, will he come clean and commit today to speaking with the commission?”

“Mr. Speaker, this is a federal inquiry into the federal government’s decision to use the federal Emergencies Act,” the defiant Ontario premier responded.

The hearings resume tomorrow morning at 9:30 am ET.

Still to testify this week is the Commissioner of the Ontario Provincial Police Thomas Carrique and former Ottawa police chief Peter Sloly.