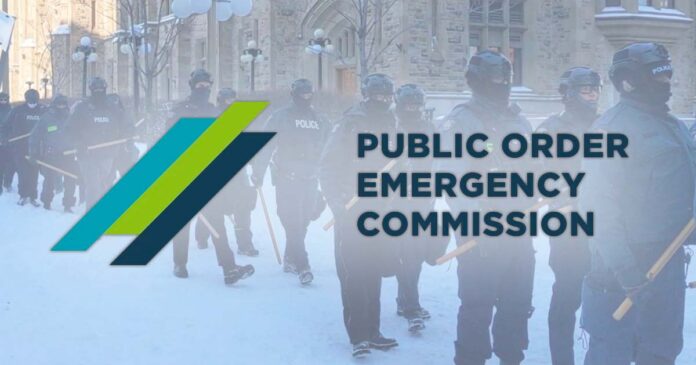 On Day 11 of the Emergencies Act hearings, disclosed text messages reveal that RCMP Commissioner Brenda Lucki considered calling in members of the military to wear RCMP uniforms and act as unarmed cops against Freedom Convoy protesters.

Ontario Provincial Police Commissioner Thomas Carrique testified today that he was on the receiving end of Lucki’s message to have Canadian Armed Forces (CAF) soldiers brought in to hold protest areas after they had been cleared.

Lucki’s message to Carrique on the 13th reads, “I was thinking we use CAF but in our uniforms as unarmed Auxiliaries or Spl. Csts. to supplement us in teams.”

Another message to Carrique from Lucki reads, “Could you see a role CAF in any of this…fir (sic) example, after we secure and all is back to “normal”, maybe keeping sites secure or patrolling unmanned POEs etc.”

Lawyers representing the Government of Canada pounced on this opportunity while questioning Carrique to try and infer that Carrique had also wanted the government to send in the military to hold protest areas that had already been cleared.

Government lawyers asked Carrique, “You’re actively considering whether or not the Canadian Armed Forces should be involved from the Ontario perspective?”

“No, I was not,” Carrique responded. “That was a discussion that was taking place, and you can clearly see from my communication that that was not what I was recommending.”

“I thought you were suggesting that the CAF shouldn’t play a role off of government properties but you could use special constables controlled by police from the CAF for unarmed patrols.”

As is becoming routine throughout these hearings, more evidence has been presented to indicate that law enforcement did not need the legal powers granted to them through the invocation of the Emergencies Act.

Lawyers for the commission asked Carrique if he agreed with OPP Supt. Pat Morris’ previous testimony saying, “(Morris’) evidence was that there were no threats that materialized and that there were no credible threats to national security, do you agree with that?”

“I do agree with that,” Carrique responded. “That’s a very important part and piece. When you move from strategic intelligence into operational and tactical intelligence and establish thresholds for mandates and charges, that further analysis needs to be done to determine whether it’s credible and whether that threat actually came to fruition.”

Convoy lawyer Brendan Miller questioned Carrique on the lack of required intelligence between all levels of law enforcement throughout the Freedom Convoy that would justify the invocation of the Emergencies Act.

“It’s fair to say that based on all OPP intelligence and the intel provided by the RCMP and federal intelligence agencies to the OPP, to your knowledge there was no credible threat to Canada as defined in Section 2 of the CSIS Act?” Miller asked.

“That would be my understanding, yes. As determined by Supt. Patrick Morris in consultation with CSIS and the RCMP,” Carrique responded.

Miller also asked Carrique about whether or not a federal bureaucrat or civil servant told him that the Freedom Convoy posed a credible threat to Canada.

“In your interactions with the members of the federal civil service prior to 11:59 pm of February 13th, isn’t it true that no civil servant ever said to you there was a credible threat of that defined by Section 2 of the CSIS Act?” Miller asked.

“And they never said to you that they had reasonable grounds to believe that such a threat existed, did they?”

“Nobody ever said that to me.” Carrique responded.

Further evidence from text exchanges between Lucki and Carrique were made public today indicating that by February 5th, just one week into the Freedom Convoy protests, Brenda Lucki told Carrique that the federal government had lost confidence in the Ottawa Police Service.

Lucki’s message to Carrique on Feb. 5 reads, “between you and I only, Government of Canada losing/lost confidence in Ottawa Police Service (OPS). We gotta get to safe action/enforcement. Because if they go to the Emergencies Measures Act, you or I will be brought into lead. Not something I want.”

Commission lawyers asked Carrique if he had lost confidence in the OPS at this time, Carrique said he wouldn’t describe it that way.

“I did feel that with the support we were providing, that there was an opportunity to develop and executive a plan that would bring upon a resolution to this and ultimately that’s what happened.”

Carrique also agreed with government lawyers that the Emergencies Act as an “extremely helpful tool.”