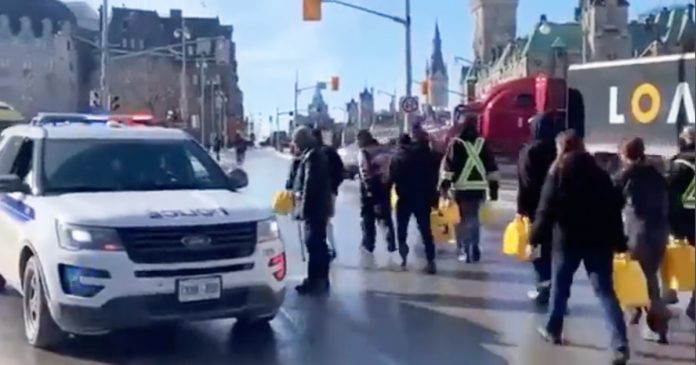 An Ontario Provincial Police (OPP) liaison apologized to Freedom Convoy organizers and accused the Ottawa Police Service (OPS) of “betrayal” after an attempt by Ottawa police to raid the convoy’s fuel depot, according to new audio exclusively obtained by True North.

Tensions over the incident apparently boiled over so much that it jeopardized the working relationship between the two police services.

Ottawa police spearheaded the Feb. 6 raid on Coventry, the nickname for the Coventry Rd. parking lot the City of Ottawa initially offered to the convoy as a staging and overflow area.

The raid not only sparked a breakdown between convoy leaders and the police liaison teams, with whom they had been coordinating since the beginning of the protest, but also between the OPP and OPS.

In a phone call after the raid, an OPP liaison apologized to convoy members and blamed Ottawa police for keeping the OPP in the dark.

The officer was speaking to convoy spokesperson Joanie Pelchat and a group of the protest’s road captains. Pelchat was not involved in the convoy’s Coventry operations but had been in regular communication with the OPP’s liaison team.

The officer said he was speaking for himself and on behalf of other OPP officers “that felt they had been betrayed or kept out of the loop.” OPP liaisons thought they were making “good progress” with convoy organizers, which was why the officer said he felt so blindsided by the raid.

Police liaisons were at Coventry when Ottawa police tweeted that “anyone attempting to bring material supports (gas, etc.) to the demonstrators could be subject to arrest. Enforcement is underway.”

The officer said in the call that the OPP liaison team would be reassessing its cooperation with Ottawa police over the incident, which he acknowledged jeopardized the “trust” built between police and convoy organizers.

“For the arrests that were made, for the other turmoil, everything that we had built and said or promised which was not followed or which was overturned by Ottawa police management, we’re just saying that we hope we can build again a relationship of trust,” he said. “For now, we’ve removed ourselves from the Ottawa police operations.”

The officer hinted the decision by the OPS to raid Coventry may have been related to “pressures from their boards, from the mayor.”

“But they could have at least informed us so we can communicate that with you as well,” he said. “That wasn’t done, so we’re sorry for that.”

Tensions between the municipal and provincial police services about the Coventry raid have been discussed before the Public Order Emergency Commission.

OPP negotiator Sgt. John Ferguson told the Commission that he was informed of the impending raid by Ottawa Supt. Mark Patterson shortly before the operation was set to commence. Ferguson told Patterson that OPP liaisons were already at Coventry and had been engaging with convoy organizers for two hours. Ferguson advised the Ottawa Police Service to abort the operation, but Ottawa police disregarded the recommendation.

Another Ottawa police inspector told Ferguson that “they did not want the fuel from Coventry Road to be displaced and that they were proceeding without warrant,” according to the Commission’s summary of its interview with Ferguson.

The OPP and OPS both told True North they would not comment while the Public Order Emergency Commission hearings are underway.