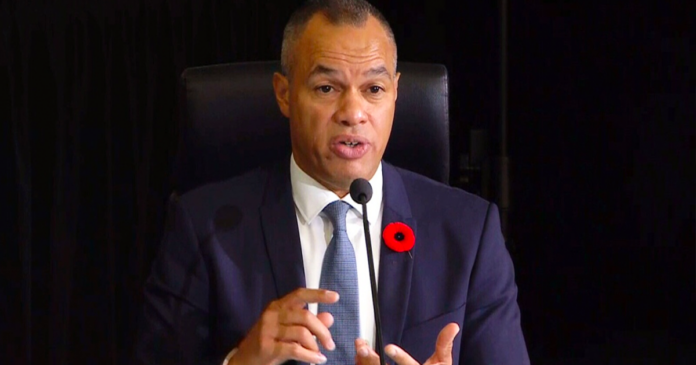 It was too cold, and it was too much.”

With those words, former Ottawa police chief Peter Sloly tried in vain to paint himself in the best light possible during his testimony Friday at the Emergencies Act probe into the multi-headed Freedom Convoy that hamstrung the nation’s capital for weeks last winter.

But he failed by breaking down emotionally, not over a tragic death in the policing community but over the sad death of his own reputation.

He had failed miserably in his duties, which turned out to be the worst-kept secret coming out of the inquiry.

Sloly was such a failure, in fact, that he fired himself, resigning in the midst of the convoy’s height of unlawfulness.

Growing emotional as he answered commission counsel’s questions, Sloly described the demonstration as “too much” for the service.

The Ottawa police “were doing their very best under inhuman (sic) circumstances, like the city was, like the community was.”

“It was too cold and it was too much. But they did their very best and I’m grateful to them,” he said.

At one point, he exaggerated the size of the occupation, stating that 3,000 trucks had commandeered the city when 500 would have been closer to the truth.

Sloly pointed to gaps in intelligence as the main issue ahead of the convoy’s arrival in Ottawa since he claimed there was no intel to suggest the convoy was going to dig in and hold Lowertown hostage and the streets in gridlock.

“To this day, even with the benefit of hindsight, I do not have any clear impression or saw any clear conclusions that we were going to have anything more than what I was being briefed on by my team,” he said.

Despite receiving regular briefings on the anticipated demonstration from the Ontario Provincial Police, the former chief said there was a “structural deficit” in Canada’s national intelligence threat assessments.

“I’m grateful for the Ontario Provincial Police (OPP) for filling that gap and doing so to the very best of their ability,” he said. “But it was not optimal for us.”

However, the commission has already seen reports and heard testimony indicating police had advance warning that some protesters were bent on staying in the capital until all vaccine mandates were repealed or until a new government was somehow installed.

But Ottawa police was planning for a one-weekend demonstration, not a three-week protest in a cold February.

A Jan. 28 OPP intelligence report shared with Sloly says that “available information” indicated that the protesters planned to remain in Ottawa “at least” until Feb. 4.

Sloly told the commission lawyers, however, that he understood that to mean the protest would take place primarily over one weekend, with a small group remaining afterwards.

On Thursday, testimony from a senior OPP officer had Sloly pleading with the OPP to send him as many resources as possible in order to kill off “the head of the hydra” and prevent other convoys from spreading elsewhere.

Clearly, Sloly found himself Friday caught between a rock and a hard place, with previous testimonies contradicting his recollections on many fronts.

And it was getting him nowhere. In fact, it put him back in the corner he was trying so hard to paint himself out of.