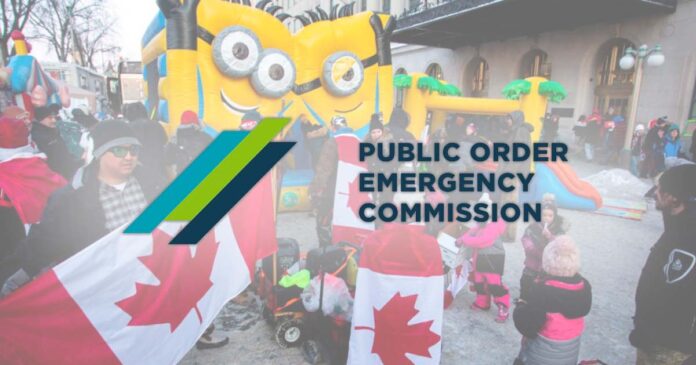 On Day 13 of the Public Order Emergency Commission, text messages between Public Safety Minister Marco Mendicino and Prime Minister Justin Trudeau’s offices revealed a plan to “get in on the growing narrative” that the Freedom Convoy truckers were “extreme.”

“I think there could be an opportunity to get in on this growing narrative of the truckers,” wrote Mary-Liz Power of Justin Trudeau’s office to Mendicino’s office. “My thoughts of the framing here would be similar to what the PM/Blair said last year when Jan. 6th occurred.”

Alexander Cohen of Marco Mendicino’s office said he was “supportive” but wanted to wait. “There’s a danger that if we come down too hard, they might push out the crazies.”

Former Ottawa police Chief Peter Sloly also resumed his testimony. Slowly said that he feared Ottawa police officers would use violence or deadly force against protesters if they were put into a situation where they were overwhelmed.

“It’s a two-way issue, not fear that the officer is going to get hurt,” Sloly continued. “But the officer may hurt or take the life of someone who is trying to overwhelm them.”

During cross-examination, Sloly revealed further mistrust within the Ottawa Police Service (OPS). The lawyer for Ottawa Police, David Migicovsky, suggested at the hearing that Sloly was working against Deputy Chief Steve Bell and that Sloly “decided that you could blame Deputy Chief Bell for not planning for this event.”

“That is absolutely incorrect, sir. I really take offense to that notion.” Sloly replied.

Sloly was asked how he dealt with difficulties with the police services board and said he “didn’t want to give too much information” because there has been a history of leaks of OPS data and pushed back on Migicovsky portraying him as a mistrustful superior officer.

Sloly mentioned that by Feb. 5 he and other officers were under “intense pressure” due to disorganization within the OPS and the protests. Migicovsky suggested that Sloly knew about command changes when he said he didn’t. Sloly pushed back again at suggestions that his behaviour was suspicious.

“You were pretty concerned that you would lose your job and be blamed for what had happened?” Migicovsky asked.

Sloly insisted that the crisis communications firm Navigator was hired by OPS to help the police with disorganization and that it wasn’t hired by him personally to protect his position.

Navigator was found to have been paid $185,992 for “communication advice” between Jan 30 and Feb 15. Steve Bell did not use Navigator after taking over on Feb 15.

Acting Deputy Chief Patricia Ferguson wrote in her notes that Sloly was angry at the arrival of Ontario Provincial Police and RCMP officers. Sloly denied this though, saying that was only Ferguson’s interpretation.

Convoy lawyer Brendan Miller then asked Sloly about his definition of supposed “assaultive behaviour” among protesters, noting there were only five charges laid between Jan 28 and Feb 15.

Sloly said that he wanted to be careful with his words and believed that there were “genuine people who wanted to do genuine things,” but that the overall impression was that it was dangerous.

When asked about the Coutts blockade in Alberta, Sloly said he felt nervous that the police response failed quickly “in a very rural part of Canada,” and felt that urban Ottawa’s response would have been hopeless without significant additional resources.

Sloly said that it is a regular occurrence for protesters to arrive with the intention of “staying until it’s over.” Sloly refused to blame or single out individuals in the protests, but maintained that the entire event was difficult to handle.

When asked by Democracy Fund lawyer Ross Kittredge about credible evidence of “sabotage or espionage,” Sloly said: “No sir.”

“Was there any credible intelligence or evidence of activities directed ultimately to lead to the destruction or overthrow by violence the constitutionally established system of government in Canada?” asked Kitterdge.

Hearings will resume on Tuesday November 1 at 9:30 am ET. Freedom Convoy organizers Tamara Lich, Chris Barber, and Tom Marazzo are expected to testify in the coming deady.