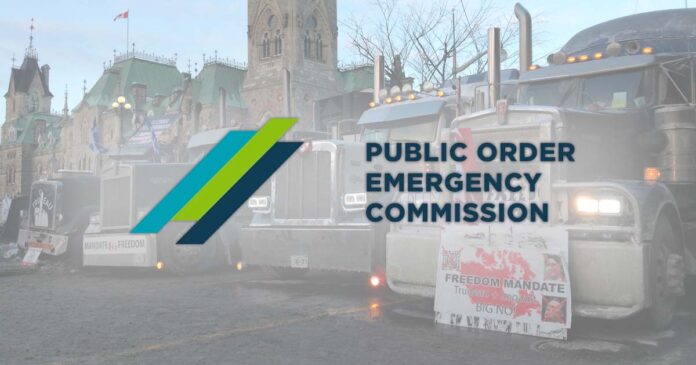 On Day 14 of the Emergencies Act hearings, Freedom Convoy protesters were given a chance to tell their side of the events in Ottawa for the first time in the proceedings.

Cross-border truckers Chris Barber and Brigitte Belton, whose efforts started the convoy, testified. Steeve Charland of the group Farfadaa, whose supporters were situated at the intersection of Rideau and Sussex during the Convoy, also testified.

Barber is the Swift Current, Sask. owner of CB Trucking who led the convoy on its way to Ottawa and played a key role in communicating with police along the cross-country journey.

Barber and Belton both testified about how they connected via TikTok early in January and started to generate attention and momentum for what became the Freedom Convoy.

Barber made videos on TikTok that criticized the federal and provincial Covid mandates because they were hurting his business.

He found that the Jan. 15 cross border travel mandate was particularly concerning to him because unvaccinated truckers would have to quarantine. He said he lost “a lot of drivers” because of the mandate and had not lost any before the mandate came into effect.

Several questions were raised about Canada Unity, a group run by James Bauder which provided early logistical support for the convoy. Bauder had already been planning some kind of protest before Barber had gotten in touch with him. There were numerous questions about a document published by Canada Unity called a memorandum of understanding (MOU), a pet project Bauder claimed, without legal basis, was the silver bullet against vaccine mandates.

Barber testified that he did not pay much attention to the MOU and hadn’t even read it himself.

Barber tells us that Belton and King were also posting on social media. Barber was asked more about Pat King’s role in planning the convoy and had not known about King’s background.

Barber testified that the convoy’s aim was to end the Covid-19 mandates. He said he didn’t know the intentions of others who attached themselves to the group.

Barber said he heard rumours that the MOU was interpreted in different ways. He eventually asked Bauder to renounce the MOU, which Bauder briefly did.

Barber testified that the level of participation in the Freedom Convoy was “beyond his wildest dreams.” Barber said his response was “emotional” and that the participation and people waiting for trucks to arrive in different cities was deeply impactful.

Barber said the movement was inclusive to everyone and did not aim to exclude King from the protests despite having a “power struggle” between them.

Barber was later asked about “skeletons in his closet” which included social media posts with racist and anti-Muslim sentiments. He said the “love” he witnessed during the convoy deeply affected him.

“It changed me… It humbled me.” said Barber.

Barber was shown a TikTok video he had posted in which he explained that the convoy was a peaceful protest, that emergency vehicles had the right of way, and that protesters had to remain respectful with law enforcement, and adhere to a code of ethics.

Barber confirmed that he had his bank account frozen on February 17, the day he was arrested. His Toronto Dominion bank account was frozen for three months.

Chris Barber’s testimony reiterated that he was in contact with the City of Ottawa on their deal to  move trucks out of Ottawa residential areas before the Emergencies Act was invoked. Barber was under the impression that the deal came off the table once then-police chief Peter Sloly resigned.

Many trucks left Ottawa altogether, and some were repositioned in the hours before the Emergencies Act was invoked.

Lawyer Paul Champ dug in on the purpose of the protests. Champ asserted that the protests came out of a spite for the provincial mandates, not the federal. Barber says people were losing their jobs due to the federal mandate requiring vaccination.

Barber said he was adamant about keeping emergency lanes open and said that he almost got into two physical altercations with truckers who wanted to park in them.

The next witness was Steeve “L’Artiss” Charland, the spokesperson of “Les Farfadaas,” a group that grew out of pandemic protests since 2020 in Gatineau, Quebec. He said he wanted the group to be a voice for those who felt they haven’t been heard by elected officials.

He says he believed in uniting people across race, religions, and languages. The group’s protests mainly targeted the Legault government for having some of the harshest Covid restrictions.

Charland first heard of the convoy in mid-January and arrived in the capital region on Jan. 29. Charland says he felt that Covid restrictions went too far and wanted to be a part of what looked like the largest protest in Canadian history.

Charland was part of the group from Quebec who parked their vehicles on the intersection of Rideau and Sussex, though he wasn’t personally stationed there. He felt he lost his right to express himself.

Charland said he had no connection with any of the blockaders in Coutts, Alberta; Emerson, Manitob;  or on the Ambassador Bridge in Windsor, Ontario.

Brigitte Belton took the stand, she says she is a truck driver who worked at a truck company called Schneider National, which no longer operates in Canada due to Covid mandates.

On November 16 2021, Belton was driving into Canada through the Windsor crossing where she describes a “very unpleasant interaction” with a Border officer. She said she was “locked in that compound and not allowed to leave.”

Belton said she believed she was going to get arrested that day. She posted a TikTok video while she was detained where she describes the situation after crossing the Canadian border.

In the video, she explains that last time she was detained, they threatened to take her truck. “Here in Canada, we’re no longer free,” she said in the video.

“This isn’t what my grandparents came for… being harassed at the border for wearing a mask.” she said.

Belton alleged that once the Emergencies Act was invoked, the leadership of the convoy shifted towards Keith Wilson after Lich and Barber had already been arrested.

Belton talked about her overall health and how it deteriorated because of Covid measures and her experiences with the CBSA. She wrote letters to MPs and MPPs about her struggles and how she seeked help but nobody got back to her with anything significant.

She compared the Covid response to Nazi Germany and referenced a conversation she had with her grandfather about snitch lines and police arresting people for having dinner with family. She noted that the conditions were comparable.