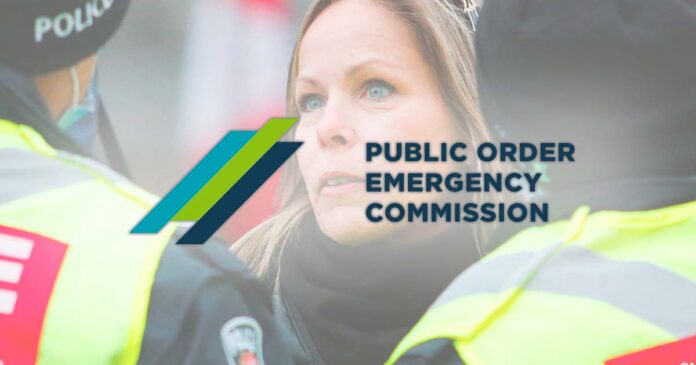 On Day 16 of the Emergencies Act hearings, the main organizer of the Freedom Convoy  Tamara Lich took the stand for the first time since her bail hearing in late July.

Lich was asked about what her life had been like after her arrest in Ottawa on Feb 17.

“I have to be very careful about every move that I make,” she continued. “My trial’s not until next year… I have to live under these conditions for a year.”

Lich talked about a live video she posted the night before her arrest asking protesters to be respectful to the police. She said she did not resonate with the “F— Trudeau” flags and that she was sympathetic towards Trudeau because he, like her, has three children.

Lich described her experience prior to her arrest. She was at her hotel when she found out that fellow organizer Chris Barber had been arrested.

“I still believe that we did an excellent job remaining peaceful and advocating for respecting the police,” said Lich.

When asked what her goal with the Convoy was, Lich said she wanted to have discussions with the government to end the mandates.

“I was seeing families torn apart,” Lich recalled in her testimony. “There were so many suicides in my hometown that they stopped counting them.”

“My grandmother was inside alone for two years,” Lich continued.

When asked about reports of harassment during the protests, Lich said she never witnessed it herself.

Despite saying that the horns were “getting a bit much to me,” Lich says she did not hear them at her hotel.

Lich said she was amazed to see Quebeckers and Albertans hugging and getting to know each other. She recalled that seeing Canadians from all walks of life get along led her to cut ties with the Maverick Party, a party that advocates for a separate Alberta.

Earlier in the day, Benjamin Dichter, who was the main organizer of communications, took the stand.

Dichter said Tamara Lich first reached out to Dichter on January 15th to get involved with media relations and start crowdfunding campaigns. He met her for the first time in 2017 in Medicine Hat.

Dichter took aim at the legacy media, saying he wanted to talk to “current media,” which he defines as “media that has been successfully able to leverage alternative media platforms.”

Dichter said he did not want to talk to the legacy media because the Toronto Star had put out cartoons defaming the Convoy.

Dichter was asked about the deal made with the City of Ottawa to move trucks. Dichter was under the impression that there was no deal in place to end the protest and thought there was “some ulterior motive” that would provide no benefit to the truckers.

“You posted something you knew was a lie,” said Miller. “You knew that they had done this deal.”

“No,” Dichter scoffed. “I didn’t go into her account, I was using her account from the very beginning.”

Dichter said Lich had asked him to be the director of all communications. Lich confirmed this. Dichter didn’t agree with the strategy for trucks to start leaving.

On Feb 18, Dichter said road captains came to his room and told him truckers were starting to get arrested and that he should leave.

“If the police are getting violent, maybe it’s time to leave,” said Dichter.

Convoy lawyer Keith Wilson reached out to Dichter and recommended that he leave because the police may arrest him and give him a “gag order.”

“Someone needs to be able to speak up for freedom,” Dichter said, recalling Wilson’s comments.

Government lawyers suggested to Dichter that protesters misunderstood which mandates were being protested. Dichter understood that the target was the federal mandates and hoped provinces would later follow suit.

James Bauder, the founder of Canada-Unity, a group which advocates for rights and freedoms in Canada, also testified. He said he found Covid restrictions and mandates to be unlawful.

Bauder said he started planning a “Convoy for Freedom” in August 2021 and later made a post on Facebook calling for people to participate in a convoy after seeing increasing Covid restrictions in Australia.

James Bauder talked about the division in Canada, and saw his movement as a way to unify the country. “Hence, Canada-Unity,” he said, referring to the name of his organization.

When asked about the controversial Memorandum of Understanding, Bauder said it was not drafted using any legal assistance. He described the document as “just a bunch of words” and that it didn’t mean anything.

Bauder was under the impression that the Government of Canada had committed treason during the pandemic and with the Emergencies Act.

Democracy Fund lawyer Ross Kitredge asked Bauder how it felt to inspire others across the world. He responded emotionally that he was thankful and grateful that Canada was able to send a message of freedom and unity around the world.

Bauder had no intention of causing violence or overthrowing the government.

Hearings will resume on Friday November 4 at 9:30 am ET. Tamara Lich is expected to finish her testimony. In addition, live streamer Jeremy MacKenzie and Convoy organizer Daniel Bulford are expected to testify.