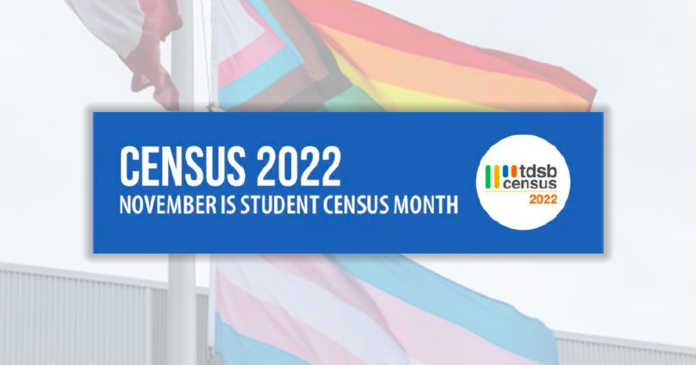 The Toronto District School Board (TDSB) is being slammed for a controversial student census that incorporates critical race theory and gender ideology.

Jamil Jivani, President of the Canada Strong and Free Network, and Samuel Sey of SlowToWrite.com – two prominent black voices who have spoken out against the perils of critical race theory – told True North how the student census demonstrates the TDSB’s commitment to administering critical race theory.

“The TDSB’s student census is clear, irrefutable evidence that critical race theory is being practiced in Canadian public schools by administrators and school board officials,” says Jivani, a former advisor to the current Ontario government.

“The TDSB has been bragging about using critical race theory and “anti-racism” – better described as racism – for several years,” says Sey. “This TDSB census, however, is a more radical mission to infringe on parental rights and indoctrinate students.”

The board recently released the research principles that will be guiding their 2022 census and the frameworks include anti-oppression theory, anti-racist and critical race theory, and decolonial theory.

These progressive theories of viewing the world typically assert that white people have created and perpetuated a system to benefit themselves at the expense of Blacks, Indigenous peoples and other racial minorities.

For example, the census will use Quantitative Critical Race Theory, also known as QuantCrit, which prioritizes black people’s and other racialized minority’s interpretation of data over white people’s.

“QuantCrit acknowledges that data are open to numerous subjective (and conflicting) interpretations and QuantCrit foregrounds knowledge of racialized people of color and other marginalized communities to inform research, analyses, and findings,” reads the document.

Jivani notes that “when Canadian have expressed concerns about CRT in the school system, proponents of the ideology have often said CRT is not being taught in schools.”

“The problem has always been both the practice of CRT in schools as well as the placement of CRT in curricula. Defenders of CRT cannot deny this,” Jivani adds.

While the TDSB has committed itself to combatting all types of racism, the board specifically targets anti-black and anti-indigenous racism.

“Although different forms of racism are deeply connected…centring and finding solidarity with Indigenous Peoples and Black lives is essential in the work of recognizing, confronting and disrupting” all forms of systemic oppression, the document notes.

The TDSB’s commitment to so-called anti-racism has led them to abolish the practice of streaming, which divides classes based on their difficulty level to better cater to the individual student’s level of skill and knowledge.

Jivani says that class streaming can disproportionately affect minorities but is a result of class inequality and can be alleviated with alternative measures.

“The solution is to ensure kids are not locked into one stream of academics too early on in their time as students, but also ensure kids are being challenged according to their abilities,” he says.

The TDSB is also being criticized for its embrace of gender identity ideology from parents rights organizations.

“For the most part, anyone who’s advocating for gender identity ideology and teaching it to children believes they’re doing the right thing,” Vee says. “But, they are not aware of the wider implications of making children confused about their sex.”

Vee says that while she has observed a shift toward embracing gender identity ideology in the past decade, parents are only now starting to realize what is being taught in schools because children were subjected to at-home learning during the Covid-19 pandemic.

“The parents during the time of Covid got to look over their kids’ shoulders…and I think that was sort of a catalyst for parents to start looking more closely at what’s going on.”

Samuel Sey says that the TDSB’s teaching and learning materials “show they’ve been using critical race theory since at least the 2014-2015 school year.”

As word of the TDSB census document circulated on social media, parents expressed concern with the school board’s direction.

“My kids are in the TDSB, I can’t sell my house and move,” one parent wrote on Twitter. “I have no idea what the hell to do.”

Another Twitter user commented that parents need to be more vocal and oppose what is being pushed in schools.

“Parents should be screaming about this nonsense. It has to stop.”