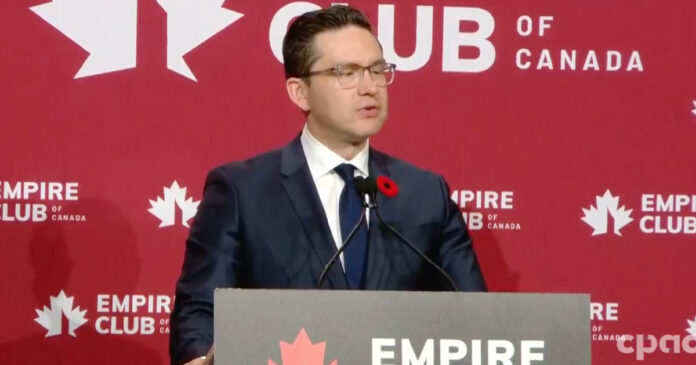 Conservative leader Pierre Poilievre slammed the Trudeau government’s handling of the country’s finances on Friday in a speech at the Empire Club in downtown Toronto.

“The cost of government is raising the cost of living,” Poilievre said.

While dismissing his critics as “pointy-headed experts,” Poilievre took aim at the government’s decision to print billions of dollars to fund its spending during the Covid-19 pandemic.

“Quantitative easing is figuratively money printing and is it literally money printing,” he said in response to critics who claim the government and Bank of Canada (BoC) did not print money.

Poilievre compared the Trudeau government’s handling of the country’s finances during the pandemic to how the Harper government handled the 2008 economic crisis, in which Poilievre claims, the government did not print money and kept inflation low in 2008.

The Conservative leader believes as a result of the government’s bungling of the economy, there has been “a massive wealth transfer from the ‘have-nots’ to the ‘have-yachts.’”

Poilievre outlined his plan to fix the economic crisis by focusing on housing, energy and workers, including pledging to repeal Bill C-69 and C-48 – two bills which have discouraged the development of Canadian energy.

On Thursday, the federal government tabled its Fall Economic Update, projecting a $36.4 billion deficit for the current fiscal year.

Despite warning of a “mild recession in the first quarter of 2023” and “a high degree of uncertainty” in its economic forecast, the government is promising $30.6 billion in new spending over the next six years.

“What we’re announcing today is to strike a balance between necessary compassion and support for Canadians, and fiscal responsibility,” Finance Minister Chrystia Freeland said in the House of Commons.

For the sixth time since March, the BoC hiked its benchmark interest rate in an effort to combat the inflation crisis – to 3.75% from 3.25%.

Despite Canada’s inflation rate declining slightly to 6.9% last month, the price of food continued to increase. According to StatsCan, the ongoing rise in food prices has hit a 40-year high.