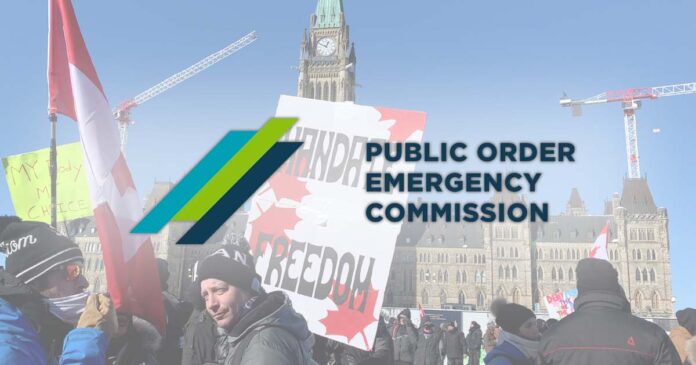 On Day 19 of the Emergencies Act hearings, lawyers presented a transcript of a call between Justin Trudeau and Doug Ford that took place five days before the Emergencies Act was invoked in which the prime minister told the Ontario premier that no extra legal tools should be required to clear protesters.

A read out of the February 9 phone call between the two proves that Trudeau never thought that Ontario required additional legal tools to clear protesters from Ottawa and from the Ambassador Bridge in Windsor.

The transcript quotes a frustrated Trudeau telling Ford, “You shouldn’t need more tools – legal tools – they are barricading the (Ontario) economy and doing millions of damage a day.”

Trudeau then calls the protests in Ottawa “not a legal protest” because the trucks were “occupying a municipal street” and “parked illegally.”

The prime minister expressed concerns about the public perception of Canada on the call to the premier urging Ford to act quickly to “prevent (Ontario) from becoming a laughing stock.”

“At a time when we’re trying to draw in investments, a whole bunch of people are looking at this and saying we can’t even clear up a protest on a bridge?” Trudeau said to Ford.

Trudeau also took a shot at the intellect of the protesters on the call to Ford, “ I always wonder if they are not very smart people,” Trudeau said to Ford. “To think about shaming Canada in all sorts of ways and hurting the economy and getting jobs back to the US.”

Trudeau was also furious about the fact that tow truck drivers were refusing to clear protesters from the Ambassador Bridge. He told Ford that if Ontario could not get tow truck drivers to comply with government orders, the United States has offered to provide tow truck operators to help Canada.

“We’ll all have to figure out what to do with these tow trucks who are not doing their job and fulfilling their duties with the city,” Trudeau said. “There will have to be a serious reckoning afterward.”

The prime minister reiterated his concern to Ford about the embarrassment for the country if Canada had to have American tow truck operators help clear the bridge protest.

“If you need tow trucks, we will get the US to help,” the prime minister said. “(I)t’ll be embarrassing for us but if the US is offering, we need to take it.”

Trudeau also appeared confused about the limits of power that elected officials have to dictate law enforcement officials when speaking to Ford.

Ford repeatedly had to remind the prime minister on the call that it was illegal for him to direct the OPP to do anything.

“I’m just as frustrated as you,” the Premier told the Prime Minister. “If I could direct the police, I would.”

“I can’t direct (the OPP). I can’t call them and say get your asses in there and kicking ass.” Ford reminded Trudeau. “It’s up to the OPP.”

Ford told Trudeau in the call that former Ottawa police chief Peter Sloly had “lost control of the situation” after speaking with senior members of the Ottawa Police Service.

The read out was submitted to the commission by Democracy Fund lawyer Alan Honner while questioning OPP inspector Dana Earley.

Read the full read out of the call between Trudeau and Ford below.


Testifying after Earley was local Windsor business owner and protester at the Ambassador Bridge Paul Leschied.

Van Huigenbos told the commission that protesters abandoned the Coutts border to distance themselves from the association of being violent when weapons charges were laid against four people.

The mayor of Coutts and Alberta RCMP officers will testify later this week.

True North will continue to bring you daily coverage of the ongoing Emergencies Act hearings.