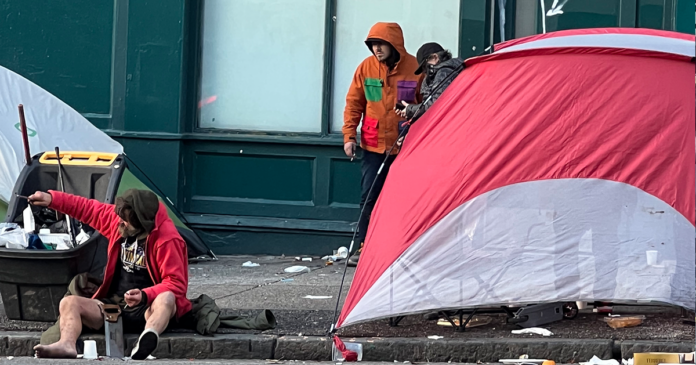 Could this be what we call hell on earth?

That’s all I could think of as I visited Vancouver’s now infamous Downtown Eastside twice last weekend — the first time on a rainy afternoon and subsequently on the one afternoon during my stay when the sun came out.

Where do I begin?

Cast your mind’s eye to rail-thin emaciated female drug addicts shuffling along East Hastings St. with nowhere really to go, an elderly Asian man dumpster diving (for what I don’t know) and dozens of drugged out people sitting on the sidewalk or cartons staring into space.

Think of trying to manoeuvre public sidewalks that have been taken over pretty much entirely for blocks by those makeshift lean-tos, scores of bikes, walkers, wheelchairs, wagons, shopping carts and of course the addicts.

As you pass, you observe one man standing in a drug-induced pose and several others shooting up with impunity in broad daylight.

The stench of urine, feces and pot is everywhere and at certain points along the street on the sunny afternoon, goods (perhaps stolen?) for sale were laid out on blankets.

This continued for blocks and blocks  — the area growing sketchier the more I moved away from the corner where West Hastings turned into East Hastings.

It was like watching a horrifying multi-vehicle accident. I wanted to unsee the decay and the mass of zombie-like drugged out people clustered together. But I couldn’t take my eyes off this Apocalyptic scene.

I later told a colleague that it reminded me of a third-world country, as bad as the slums of Soweto in South Africa I visited 20 years ago.

It was hard to believe that a mere 20-minute walk away from this hellish site lay Canada Place, Vancouver’s seaport and the tony Coal Harbour area.

But this is proof of the harm of safe injection sites, a permissive out-of-control drug culture, politicians who have let the problem escalate and social justice do-gooders who are doing more harm than good.

I wanted very much to see for myself what has happened to the Downtown East side since InSite opened its first safe injection site in 2002.

Just prior to 2017 in Toronto — when the board of health and its chairman Joe Cressy did a sales job for the same permissive model here — a woman came to council from Vancouver to warn that the area was becoming a Dante’s Inferno.

I spoke to police officials in Vancouver at the time who contended that without enforcement and mandatory rehab, the SIS model wouldn’t work.

That was seven years ago. Vancouver’s East Side has turned into a horror show and even the streets surrounding it as far as Gastown have a sketchy feel.

In November of 2017 Cressy gleefully announced that the federal government had approved three safe injection sites for Toronto — insisting repeatedly the sites save lives.

Now Cressy has left his Councillor job and left the mess to others, as has Mike Layton and Kristyn Wong-Tam, all of whom pushed for the drug enabling sites.

That has grown in five years to nine supervised consumption sites and a variety of others located in hotel shelters under a program called I-Phare (Integrated Prevention and Harm Reduction Initiative) — a kind of one -stop shopping for drug addicts.

There’s no doubt these initiatives have attracted drug dealers and crime to the neighbourhoods where they are located.

Because they are more spread out than Vancouver, the addicts aren’t camped on the sidewalks of several blocks of East Hastings.

At least not yet.

But they certainly have wreaked havoc on the neighbourhoods where they are located.

Take the Bond Hotel shelter on Dundas St E., where I shot a video a few weeks ago while dealers plied their trade right behind me and zombie addicts occupied the sidewalk outside the shelter.

I spent considerable time outside the Street Health safe injection site, also on Dundas St. E., and The Works on Victoria St., both of which have severely changed the characteristics of the neighbourhoods they are in.

Dirty needles, crime, transients hanging out outside both sites and an increasingly sketchy vibe at Yonge-Dundas square and in Cabbagetown where hookers trade sex for drugs has been the norm.

Mayor John Tory and councillors have turned a blind eye to the increasing crime and refuse to connect the dots that lawlessness is on the increase because of these drug enabling philosophies.

The few Vancouverites who dared to speak up about InSite and Vancouver Coastal Health— which runs the safe injection programs —cited stats that deaths from overdoses have actually increased since 2002 and that a mere 3% of InSite users are referred for rehab.

They were loudly attacked by the harm reduction activists.

Now five years later, Vancouver’s East Side is a depressing and horrifying mess — one that will take extreme political will to ignore the noise of the activists and to clean it up.

It should certainly be a wake-up call for Toronto’s politicians.

If they think it can’t happen here, they’re sadly misinformed.