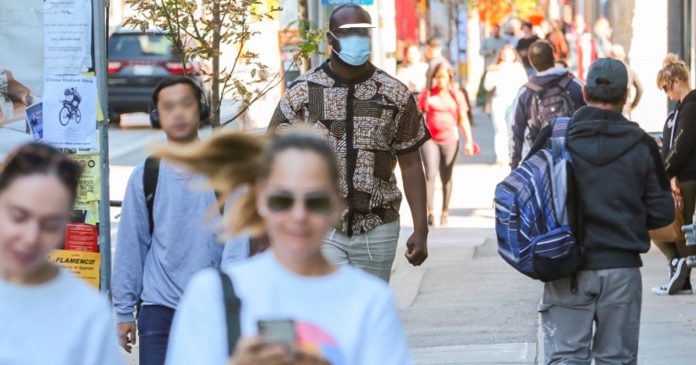 While the University of Waterloo rushed to reinstate a mask mandate on Wednesday, doctors who work at Toronto-area hospitals tell True North that a broader return of such mandates just isn’t needed.

“It’s a little bit of theatre in my mind,” says Dr. Sumon Chakrabarti, an infectious diseases physician, reflecting on the recent talk of renewed mask mandates. “We’re 2.5 years into this. The vast majority of us have immunity, whether from infection, vaccines or both.”

Dr. Chakrabarti says he supports an individual choosing to wear a mask for personal reasons, but has concerns with the direction the broader discussion has headed.

Ontario has been grappling with a rough fall cold and flu season, which has seen children visit hospital for various ailments and drug store shelves empty of basic medicines. It’s in response to this that some voices have suddenly surged forward to demand a return to mandatory masking.

“Now all of a sudden, people are talking about masking for RSV (respiratory syncytial virus), for instance. On a population level, I don’t think we have the evidentiary justification for that,” Dr. Chakrabarti says.

“At this point in time, a perspective shift is necessary,” he adds. “Every single time we hear hospitalization rates go up, I don’t think mask mandates are the answer.”

He’s not the only one making these points.

“The problem we’re having right now with the surge in paediatric admissions in hospitals is not due to Covid, it’s due to other respiratory viruses,” says Dr. Neil Rau, an infectious diseases physician who works in Toronto-area hospitals.

Dr. Rau is likewise worried about calls to implement masks in this new environment. “We’ve had surges of RSV in the past, although not to this degree, and we’ve never implemented masks before,” he says.

The other big problem, Dr. Rau says, is that it’s unclear what the goal and end point would be of bringing back forced masking.

“You end up in a bit of a bottomless pit,” he says. “It’ll be the ‘just two weeks to flatten the curve’ syndrome all over again.”

Meanwhile, a secretive GoFundMe page has managed to raise $32,000 so far to attempt to take the Ontario government to court and demand masks be forced on students across the province. The organization — labelling itself Ontario School Safety — refuses to disclose the persons behind the campaign, arguing that “it is not uncommon for those voices that are advocating for safety to be targets of harassment.”

The only person who has been disclosed as associated with the campaign is Heather Hanwell, an academic with Toronto’s Dalla Lana School of Public Health.

The majority of the funds associated with the GoFundMe campaign appear to have been raised in early September, before the dire predictions about Covid-19 and schools this fall was proven to be false.