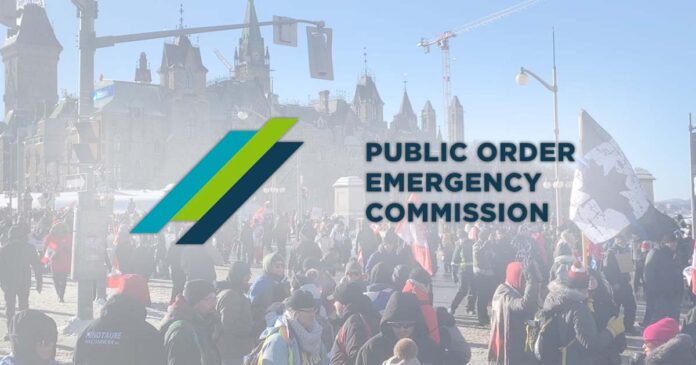 On Day 21 of the Emergencies Act hearings, the Ontario Deputy Solicitor General testified that he did not have any concerns about violent crime at any time throughout the Freedom Convoy protest.

Under questioning from Commission counsel, Mario Di Tomasso was asked, “did you have public safety concerns about what was happening in Ottawa by February 6?”

“No,” Di Tomasso replied. “I was still not seeing any significant serious violent crime concerns at all.”

“At no time did Chief Sloly (Ottawa Police) or Commissioner Carrique (Ontario Provincial Police) communicate to me that there were significant public safety concerns from a violence perspective,” Di Tomasso also replied.

“By that point on the 13th,” Honner asked Degrand, “you had no idea that the federal government was about to invoke the Emergencies Act?”

Degrand also testified under questioning from Convoy lawyer Brenden Miller that none of the provisions in the Act were used by Alberta RCMP to clear the Coutts border blockade.

A text exchange between former Alberta transportation minister Rajan Sawney and Coutts mayor Jim Willet was disclosed in front of the commission Thursday, in which Sawney asks Willet about a since-debunked rumour that country singer Paul Brandt and Rebel News were using helicopters to airdrop food to protesters at the Coutts border.

Sawney asks Willet in the text exchange, “Was food dropped off to protesters by helicopter?”

Willet responds that he was unaware of whether that was the case but was aware that Rebel News had rented a helicopter.

Government of Canada counsel asked Degrand, “this notion about Paul Brandt renting a helicopter, coming to drop off food and putting on a concert, that was disinformation, right?”

“I believe it was,” Degrand responded. “We actually conveyed that to the RCMP and they had conversations with Mr. Brandt’s personnel and they indicated that they had no intention of providing a concert there.”

“There’s nothing to indicate whether (Brandt) did what was rumoured to be done, and even if it was the case, it would’ve occurred prior to any restrictions to airmen notifying them of restrictions on the air space,” Degrand also said.

Public hearings resume on Monday, November 14 at 9:30am ET.

Officials from the RCMP and other high-ranking law enforcement officials are scheduled to testify including RCMP Commissioner Brenda Lucki.