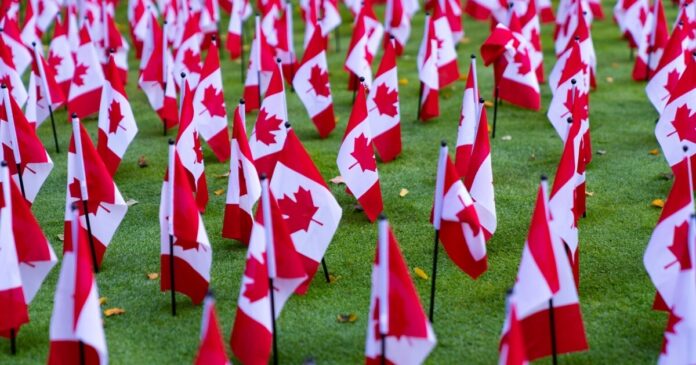 Businesses across Canada are taking steps to honour fallen Canadian heroes ahead of this year’s Remembrance Day ceremonies.

On Wednesday, Manulife’s global headquarters in Toronto opened its 12,000 flag display honouring Canadian Armed Forces (CAF) members who lost their lives in the line of duty.

Each flag represents 10 CAF veterans who paid the ultimate sacrifice for their country. During the opening ceremony, Manulife officials delivered remarks alongside several CAF veterans.

“We are indebted to those who gave their lives to protect our freedoms and the values we cherish most. The depth of our respect and gratitude to the men and women who served, and who continue to serve, our country is immeasurable,” said Manulife’s global head of regulatory and public affairs Peter Wilkinson in a statement emailed to True North.

Canadians will be observing Remembrance Day on Nov. 11 alongside other citizens of the Commonwealth.

A few kilometers away, the Sunnybrook Veterans Centre will also be undertaking “Operation Raise a Flag” on Nov. 11 by adorning the veterans care facility with 30,000 flags to pay tribute to the hundreds of residents staying at the facility.

“Operation Raise a Flag continues to be a special and touching tradition that means so much to our Veterans and their families,” said Dr. Jocelyn Charles, Medical Director of the Veterans Centre in a press release.

“Our Veterans have shown tremendous resiliency as they dealt with the unknowns of the pandemic. Operation Raise a Flag has a tremendous impact as Canadians pay tribute to our Veterans and recognize the sacrifices and contributions of Indigenous Veterans in service to Canada.”

Canadians are being asked to support the program by sending a virtual note to veterans residing at the facility or by making a donation online.

In 2022, Sunnybrook revealed that 50 of the veterans residing at the centre were centenarians or 100 years old or older.