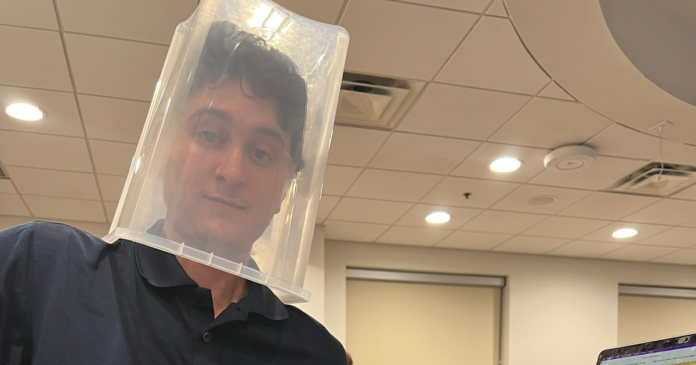 Whether it’s wearing a clear plastic bucket over his head instead of a mask or loosely tying a zip loc bag around his mouth, Wilfrid Laurier University student Kamil Bachouchi is coming up with humorous and creative ways to lead what he calls a “peaceful revolution” against his school’s mask mandate.

“Finding a way to mock the current regulations, without disobeying them, was what I deemed the best course of action to open peoples’ eyes, while waiting to garner the widespread support to initiate a school-wide refusal of the mask mandates,” the 21-year-old philosophy student explained to True North.

However, the student says that it’s really only one class that he even needs to wear the spoof masks in. One of his teachers issued an ultimatum that students needed to wear one or be kicked out. But in most other classes, teachers apparently don’t care if students don’t wear them and the policy does not seem to be widely enforced.

“Now, it’s hard to find someone wearing a mask in those classes,” Bachouchi says of several of his courses.

Bachouchi began posting images of himself to Twitter lampooning the mask rule a couple of weeks ago, although the mandate has been in place since the beginning of the fall term. Laurier is one of the few non-medical facilities in Canada that requires masks be worn.

“I had been debating doing something about these mask mandates for a while,” Bachouchi explains. He says he was one of the small number of students who was kicked out of school the previous year for refusing to disclose vaccination status.

“The students are supportive and open to this fight, they just need to know that they aren’t alone in fighting for their rights,” says Bachouchi, who plans to go on to law school after undergrad.

A similar experience is unfolding at another Ontario post-secondary institution. The University of Waterloo reinstated a mask mandate on Nov. 4 and is already facing blowback and non-compliance from students. A recent True North story explained how a student scrawled “mask mandate is a joke” on the whiteboard in front of a class.

“Lots of students won’t put them back on,” a lecturer from Waterloo explained on social media.

Are you a student or faculty member at Wilfried Laurier University who has information to share about the response to the renewed mask mandate? Email us at [email protected].