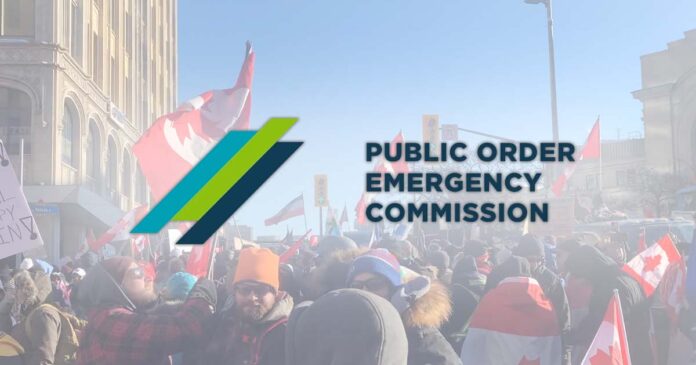 Under questioning from Convoy lawyer Brendan Miller, the former deputy minister for public safety Rob Stewart confirmed that CSIS advised the federal cabinet that the Freedom Convoy did not pose a national security threat.

A document was presented to the commission which detailed the conversations that CSIS officials had with members of the federal cabinet throughout the Freedom Convoy protests.

The document stated that the Director of CSIS, David Vigneault, told the federal cabinet, “at no point did the Service (CSIS) assess that the protests in Ottawa or elsewhere constituted a threat to national security as defined by Section 2 of the CSIS Act,” and “CSIS cannot investigate activity constituting lawful protest.”

Vigneault also went on to clearly state that CSIS had no evidence to suggest that foreign state interference was involved in the Freedom Convoy.

The document reads: “CSIS assessed that there was no indication of foreign state interference occurring in the course of the protests.”

According to the same document, when Vigneault became aware that the federal government was seriously considering invoking the unprecedented measures to quash the Freedom Convoy, he “felt an obligation to clearly convey the Service’s position that there did not exist a threat to security of Canada as defined by the Service’s legal mandate.”

Vigneault’s final consultation with cabinet occurred on February 13, just one day prior to the invocation of the Emergencies Act.

In the Emergencies Act legislation, “threats to the security of Canada” is defined by Section 2 of the CSIS Act.

When asked by Convoy lawyer Miller if Stewart was told by Vigneault that the Freedom Convoy did not constitute a threat to national security, Stewart responded, “that is correct.”

You can watch the entire cross-examination of deputy minister Rob Stewart by Convoy lawyer Brenden Miller below.

Later on, Stewart was questioned by Ontario Provincial Police (OPP) counsel regarding the failure of the federal government to consult law enforcement agencies about their plans to invoke the Emergencies Act.

“Which law enforcement agencies were consulted about the use of the act?” OPP counsel asked Stewart.

“What I would say to you is there were no police agencies asked about the act itself. They were always asked, ‘Do you need more tools?’,” Stewart responded.

“So my question is, which agencies were asked whether they need more tools?”

Counsel for the OPP then pushed back and told Stewart that the OPP Commissioner, Thomas Carrique testified that he was never consulted on the use of the act or about what tools the federal government could provide to the OPP.

Justice Centre for Constitutional Freedoms Lawyer Rob Kittredge asked  Stewart if agreed with other law enforcement witnesses at the Inquiry if the Emergencies Act was “useful but not necessary” to clear protesters.

“I believe that the invocation of the Emergencies Act provided very useful tools to law enforcement.”

“Useful tools, but not necessary tools,” Kittredge responded back to Stewart.

“I’m not in a position to render an opinion on that,” Stewart responded. “Upon the invocation of the act and the use of those tools the protests stopped. That goes beyond useful.”