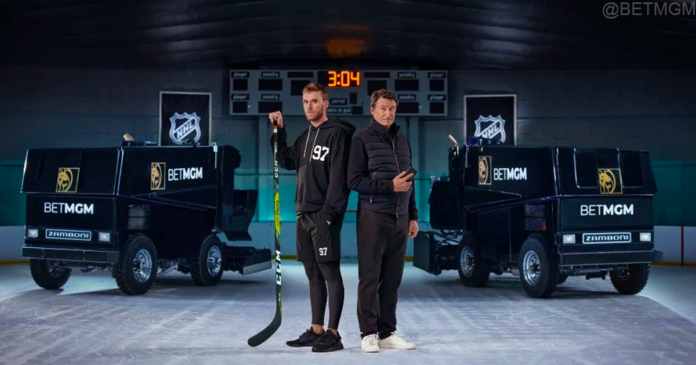 There is something pitiable — sad, really — to see an iconic sports legend like Wayne Gretzky shilling for an online betting outfit as if he somehow needed the money and was therefore willing to lose his moral compass.

It’s so unbecoming. So unsettling.

The Gretzky television commercial for BetMGM also hauls in Edmonton Oilers superstar Connor McDavid — the Oilers’ old guard and the new guard — as part of the shill, which is disturbing enough to see today’s stars embracing a practice that was once so illegal it brought universal shame.

If this relatively new industry truly needs its shills, then how about the game-throwing Chicago Black Sox baseball team for a reflective poster, or the Cincinnati Reds’ Mr. Hustle, Pete Rose.

What got Rose forever banned from baseball, never to enter the sports Hall of Fame which he so richly deserves, was his gambling on baseball, which is now so legal that one cannot watch a major-league sporting event on TV without being inundated with online betting advertisements.

And then, of course, there was NBA superstar Michael Jordan who gambled thousands as if they were fivers. It became known that Jordan had an insatiable thirst for betting on the golf course, often making bets of $100,000 per hole. This is no doubt the manner in which he was able to incur an awe-inspiring debt of $1.2 million in a single game.

This specific event was actually the inspiration behind Jordan’s book titled, “Michael & Me: Our Gambling Addiction…My Cry For Help,” a book of memoirs dedicated to his gambling shenanigans. At the end of their 10-day golf betting extravaganza, however, Jordan was able to drop the loss to around $300,000 and made good on his debt to the winner.

These online gambling ads are so omnipotent, for example, that Brendan Caldwell, president of Toronto’s prestigious Caldwell Securities, stepped away from his financial newsletters and television slots to warn of the perils of online gambling.

In a recent appearance on News Forum Today, Caldwell talked to host Nima Rajan of how the explosion of online gambling will bring so much harm that gamblers will eventually end up taking their own lives for failing to bet themselves into prosperity.

“When people find themselves in financial difficulty they want to get rich quickly. (But), as the great sports commentator John Madden once said, ‘The road to Easy Street goes through a sewer.’

“We see it is my business where online discount brokerages offer margins,  and leverages and money to buy stocks,” said Caldwell. “People have taken their own lives over the negative consequences of borrowing money to buy stock.

“You cannot gamble your way to financial prosperity. That’s just not how it is going to go.”

Said Caldwell, “if you are watching this Wayne, I think it’s unconscionable that the greatest hockey player in the history of the world would use the platform he has to promote betting that will one day have sports fans taking their own lives.

Interestingly, in his commercial with Connor McDavid which promotes the online betting site, Gretzky is shown gambling on a basketball game — N.Y. Knicks vs. Philadelphia 76ers — rather than a hockey game.

“How likely is Gretzky or any other athlete to bet on a sport they don’t play, rather than one they do?” asked Caldwell. “Deep down, even the ad agencies, the athletes and the teams that receive the sponsorship dollars know the problems they are creating.”

As Caldwell reminded viewers, there is a Gamblers’ Anonymous much like there is an Alcoholics’ Anonymous. The difference is that gambling can take a person to the bottom — lost job, lost home, lost family — far faster than it takes an addicted drinker to do the same.

Academics at Sweden’s Lund University recently monitored more than 2,000 people with gambling disorders, for example, and found a significantly elevated risk of suicide — 15 times higher — among participants compared to the general population over a 10-year period.

It was a significant study.