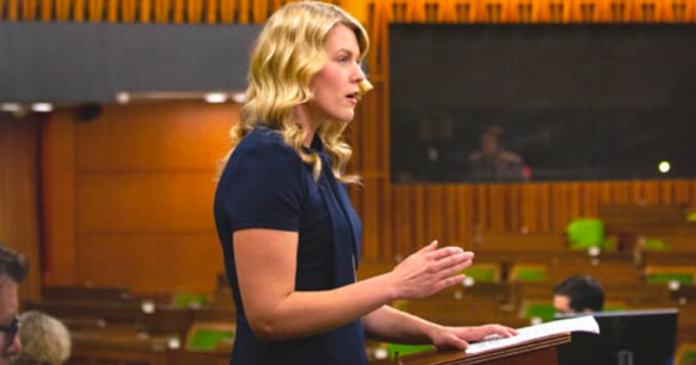 Conservative MP Rachael Thomas says that Canadian Radio-television and Telecommunications Commission (CRTC) chair Ian Scott walked back comments that Bill C-11 would lead to the policing of online algorithms because “he told the truth by mistake.”

In June, Scott told the Senate Standing Committee on Transport and Communications that the Trudeau government’s controversial internet regulation bill could be used to mandate web platforms manipulate their algorithms.

However, Scott walked back the remarks this week, telling the same committee that “unfortunately, my previous remarks have been taken out of context by some witnesses that have appeared before you.”

“To be clear, the CRTC’s objective is to ensure that Canadians are made aware of Canadian content and that they can find it. It is not about manipulating algorithms; it is about encouraging innovation,” he added.

Thomas, who is the Conservative heritage critic, told True North in an email Thursday that the issue was not that Scott’s comments were taken out of context, but rather that “he told the truth by mistake and now wants to walk it back.”

“Mr. Scott has rightly pointed out that bill C-11 will mandate the CRTC to require platforms to use algorithms to bump some content to the top of the page and keep some content out of site. This is done in the name of promoting Canadian content, something that isn’t defined in the bill,” said Thomas.

“Why should the CRTC have the power to determine what is worthy to be called Canadian?”

Scott also addressed the issue of C-11 regulating user-generated content at this week’s committee meeting. Many voices, ranging from online content creators to tech giants, have expressed concerns over this potential

While Scott previously confirmed that Bill C-11 would regulate user content, he told the senate committee this week that “the CRTC is not being given the power to regulate individual users in relation to the content they create.”

He added that the regulatory agency “has no intention of regulating individual TikTokers, YouTubers or other digital content creators.”

In reaction to his statement, Thomas said “Mr. Scott is saying ‘just trust us.’ Why should Canadians trust him? Or the government?”

“The bill allows the CRTC to regulate User Generated Content, which means the government, through the CRTC, will regulate what Canadians can see, hear, and post online,” she added.

Thomas’ comments referenced section 4.2 of the bill, the provision that critics say opens the door to the regulation of user generated content.

“If the CRTC has no intention of regulating the content Canadians post online, the provision should be taken out of the bill and explicit protection should be put in place,” she said.

“The fact that the government is insisting on keeping the provision points to their likely intent, which is to censor Canadians.”

“Bill C-11 will stifle the voices of digital first creators and hinder Canadian viewers’ ability to find the content they love. To have a government agency regulate the dissemination of information online puts Canada in step with countries like North Korea, China, Iran, and Russia,” said Thomas.

Bill C-11 has completed second reading in the Senate and is currently facing consideration in committee.

True North reached out to the CRTC to get comment from Scott but did not hear back in time for publication.