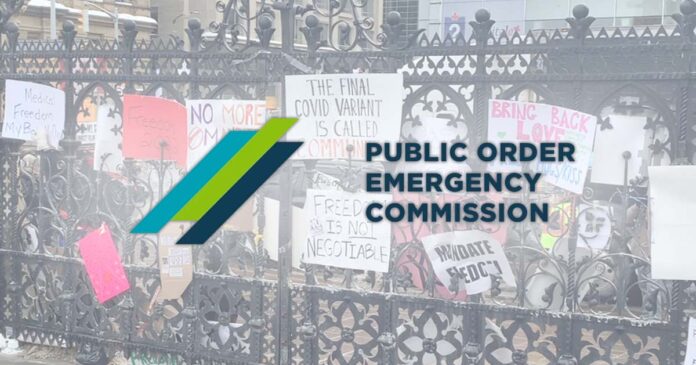 On Day 26 of the Emergencies Act hearings testimonies revealed that Prime Minister Justin Trudeau invoked the Act on the advice of the Clerk of the Privy Council and not based on a detailed threat assessment of the Freedom Convoy by law enforcement authorities.

Clerk of the Privy Council, Janice Charette, was asked by Commission lawyers to describe the document Trudeau signed to adopt the emergency powers. It was titled, Memorandum for the Prime Minister: Invoking the Emergencies Act to End Nation-Wide Protests and Blockades.

The document lays out the history of the Emergencies Act, the legal threshold required for the government to invoke it and Charette’s opinions as to why it was justified. The document was provided to the Prime Minister on February 14th.

The document states, “While the demonstrations started out relatively peaceful, they have grown more complex and have expanded into multiple locations in the country. The movement is considered to be highly organized, well financed and is feeding a general sense of public unrest that could continue to escalate with severe threats to public security, economic stability and international relations…a more detailed threat assessment is being provided under separate cover.”

Commission counsel then asked Charette, “can you tell us about that threat assessment?”

“When we got to this point, it would have been reasonable to expect that we would have been able to include as part of the package going to the Prime Minister, ‘here’s a threat and risk assessment’ – that was not ready by the time this memo was being sent,” Charette told the Commission.

“We have gone back and searched all our records. We have not been able to find that, to the best of my knowledge. There was no written detailed threat assessment provided under separate cover.”

“I think we hoped for it. To the best of my knowledge, to the best of our records, we don’t have a detailed threat assessment written that was provided to the Prime Minister under separate cover.”

You can read the entire document prepared for the Prime Minister on February 14 below.


Commission counsel then asked Charette if Cabinet was aware that CSIS had determined that there was no threat to the security of Canada prior to the invocation of the Act.

“Was the cabinet aware that CSIS had assessed that there was no threat to the security of Canada under Section 2 of the CSIS coming out of the protests?” Commission lawyers asked.

“Cabinet was aware that CSIS had not assessed a threat to the security of Canada necessary to trigger their authorities under the CSIS act. To the best of my knowledge, to this day, there was no CSIS investigation of the protest,” Charette replied.

An email between RCMP Commissioner Brenda Lucki and deputy minister of public safety Rob Stewart indicates that Lucki wanted to make it clear that not all tools had been exhausted by the RCMP to deal with the Freedom Convoy prior to the invocation of the Emergencies Act.

Commission counsel asked Charette if Cabinet had been made aware of Lucki’s comments and knew that law enforcement officials felt that existing tools could still be used.

“I think it’s fair to say that cabinet was briefed that there were tools and authorities in many organizations that had not been fully deployed,” Charette said.

Testifying before Charette was the deputy secretary of emergency preparedness Jacquie Bogden.

Under questioning from Convoy lawyer Brenden Miller, Bogden repeatedly refused to answer basic questions about the text of the legislation in the Emergencies Act and the definition of a threat to national security.

Democracy Fund lawyer Alan Honner addressed a separate document prepared for ministers at the February 13 cabinet meeting from the office of the National Security and Intelligence Advisor to the Prime Minister.

The memo reads that the majority of events across the country have been peaceful and the disruption to government activities is “so far minor”.

It also claims under a subsection titled “CSIS” that there were “no concerns at this time.”

Hearings resume on Monday, November 21 with the Commissioner and senior members of CSIS. Commissioner Rouleau determined that CSIS testimony would be heard in private to protect intelligence which could harm the security of Canada.

Scheduled to testify next week are senior members of the federal cabinet including Justin Trudeau, Chrystia Freeland, Marco Mendicino and Bill Blair.