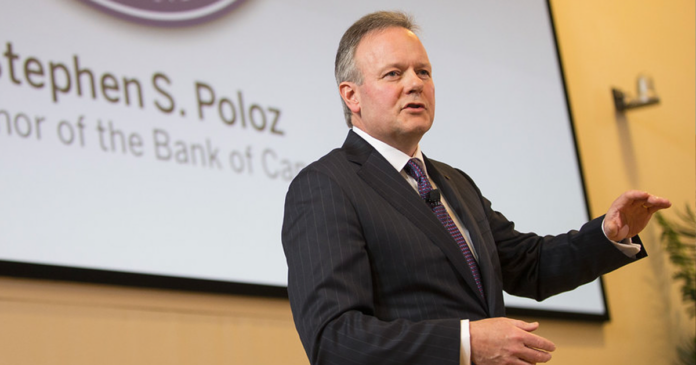 While speaking about the country’s export potential during a Forum for International Trade Training webinar, Poloz pointed to the fact that Canada was second to last for productivity performance among Organization for Economic Co-operation and Development (OECD) countries.

“The living standard can’t be maintained with things like fiscal policy or good monetary policy. Those are just ingredients that can help around the edges,” said Poloz.

Poloz said that cumbersome regulatory processes have created too much uncertainty for businesses.

“We tend to get in our own way. There’s a lot of low-hanging fruit around the productivity issue. It has to do with government regulations or processes for getting things done,” explained Poloz.

“If you’re putting headwinds in front of that all the time. Regulations are different one province to another or between the provinces and the feds. (Businesses) are not sure who’s in charge and who sets the scene and so on,” he continued.

“I do think that there’s a stronger incentive to clean up some of the regulatory issues, the red tape kind of issues or that sort of thing that’s slowing us down.”

Over the summer, a report by the CD Howe Institute also found that Canada was lagging behind other OECD countries for attracting investment.

“Business investment is so weak that capital per member of the labour force is falling, and the implications for incomes and competitiveness are ominous,” wrote researchers.

“Investment per available worker lower in Canada than abroad tells us that businesses see less opportunity in Canada, and prefigures weaker growth in Canadian earnings and living standards than in other OECD countries.”

In the House of Commons on Friday, Conservative leader Pierre Poilievre blasted finance minister Chrystia Freeland for being “out of touch” on the state of the economy after claiming that inflation was going down.

“The reality is that inflation in Canada went down or remained stable for four consecutive months. That is good news, but we understand that Canadians are having a tough time. That is why we have a responsible and compassionate tax plan to help the most vulnerable Canadians,” said Freeland.

“She tells Canadians that they have never had it so good. She is out of touch, and Canadians are out of money. One of the reasons is the rising cost of fuel,” said Poilievre.

“Home heating bills are up 77% in Newfoundland and Labrador. There are similar increases across the Atlantic, and northern Ontario will get hit hard because of oil heating, yet the government wants to triple the carbon tax to punish people further. This is after the tax has failed to reduce emissions or hit targets to fight climate change.”