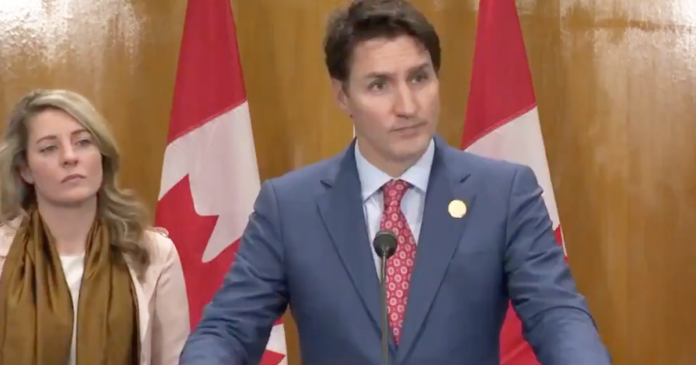 Prime Minister Justin Trudeau is claiming that he was never briefed on the fact that 11 candidates were suspected of benefitting from Chinese government interference during the 2019 election.

During a press conference in Tunisia this weekend, Trudeau alleged he first learned about the incident from the media.

“Let me be clear, I do not have any information, nor have I been briefed on any federal candidates receiving any money from China,” said Trudeau.

“I have asked the officials to examine these media reports and give all possible answers, everything they can, to the parliamentary committee that’s looking into this.”

The prime minister’s claims are contrary to reports that Canadian Security Intelligence Service (CSIS) officials presented briefings to Trudeau and his cabinet in January on the subversion.

“Last week both (Trudeau) & (Melanie Joly) told media they raised ‘serious concerns’ over China’s interventions in the 2019 & 2021 elections. Now they’re saying they have no info & have never been briefed? What?!? I guess we all experienced it differently,” tweeted Doherty.

Conservatives have called for a full investigation into the matter and for the federal government to reveal which candidates were targeted by the operation.

It is alleged that nearly a dozen people received Chinese Communist Party funding and had agents actively working to influence the direction of policy.

“The Chinese Communist Party … is using all elements of state power to carry out activities that are a direct threat to our national security and sovereignty,” a CSIS spokesperson told Global News.

When the story first broke, the Prime Minister’s Office refused to acknowledge whether he was personally briefed this year.

Tensions between Canada and China came to a head at the G20 summit in Bali, Indonesia last week after Chinese president Xi Jinping confronted Trudeau for allegedly leaking details of a conversation between the two to the media.

“Everything we discuss has been leaked to the paper; that’s not appropriate,” said Jinping. “That’s not … the way the conversation was conducted. If there is sincerity on your part.”

Trudeau for his part responded: “We believe in free and open and frank dialogue and that is what we will continue to have. We will continue to look to work constructively together, but there will be things we will disagree on.”