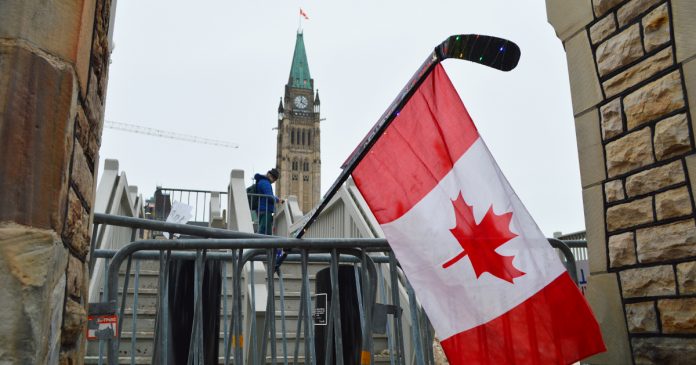 The ass-covering now truly begins as those testifying at the probe into the Emergencies Act are now senior politicians in the Justin Trudeau government.

Theirs will be an act of cleansing.

First in the box was Bill Blair, Minister of Emergency Preparedness and former chief of the Toronto police.

“I’ve spent most of my life telling police officers to do their job, and I have every confidence in them,” Blair told the commission. “I’m very proud of my profession. I’m very proud of the men and women who do that work, and I was just trying to encourage them.

Blair, for example, thought the Ottawa Police had an “incorrect” initial response.

“Based on the intelligence that they had, I think allowing those trucks into the downtown core to establish themselves and become essentially very large barricades … I believe that was a mistake,” he said. “It would be better had that not happened.”

And, when he saw news of progress at the Ambassador Bridge blockade in Windsor, Ont., Blair texted his chief of staff Zita Astravas to say “the police are finally doing their job.”

Coming around to the eventual major police action that was seen in the days following the invocation of the Act, Blair told the commission that he thought the police did “an excellent job” in clearing the convoy.

Blair was questioned about comments he made during a Jan. 28 call with his cabinet colleagues in which he said, based on notes taken: “we need to keep the language down.”

“I believe we all have a responsibility to do what is necessary to keep the peace and I was concerned that inflammatory language could incite a more violent response potentially or incite others to continue to come to the protest,” Blair said.

“And so I think one needs to maintain—and I’ve had some experience in this— in your language around an event to speak of it in such a way as to not aggravate it.”

He then went on to elaborate: “I believe in my experience sometimes people live down to your expectations, and so one would want to be careful in how you speak of these events,” he said. “I also quite frankly am always concerned about fear.

“I think fear is one of the greatest enemies of public safety and I think if our language is intemperate, we can make people quite fearful,” he explained.

“And if people are fearful, then they don’t use public space. They don’t engage with their neighbours; it can actually create a more dangerous situation. And so my advice to colleagues was that we would remain temperate in our language.”

Under questioning by the Canadian Civil Liberties Association (CCLA), the minister was asked whether he or his federal colleagues were feeling embarrassed about what was happening in Canada given the international attention on the convoy.

Blair responded: “I’ve never indulged myself in feelings of embarrassment. I’ve got a job to do, we have a responsibility to protect Canadians … and I believe all of my colleagues were deeply motivated by our responsibility to Canadians to do what was required to restore the rule of law and peace.”

The CCLA then called up an undated text message Blair sent to Astravas. According to the screenshot the minister said:

“I am wondering if anyone else is embarrassed that the protest on Wellington is expanding. Dozens of new porta-pottys and a new stage where they are currently holding a concert.

“I am embarrassed for my former profession. And worried for my government which is being made to look very weak and ineffective. I can’t believe that I am hoping that (Ontario Premier) Doug Ford will save us.”

When this was put to him Blair says while his remarks were “intemperate” he was very concerned, going on to list some of what was concerning him, from people losing confidence in the police and the views many had that the federal government was responsible for the situation.

Next up? Public Safety Minister Marco Mendicino, who testified Tuesday that cabinet ministers were worried about their personal safety from the outset of the Freedom Convoy protest in Ottawa because some demonstrators had posted online about targeting their homes.