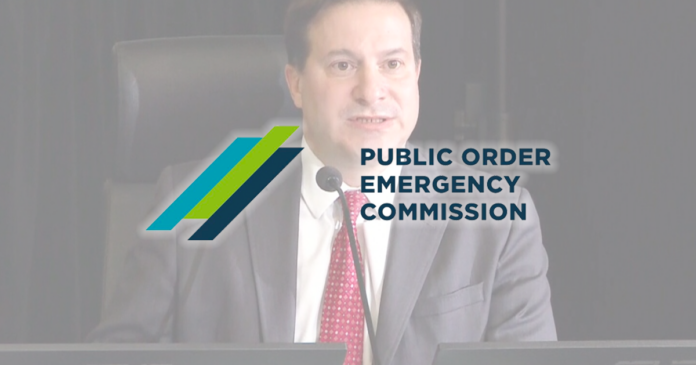 On Day 28 of the Emergencies Act hearings, Public Safety Minister Marco Mendicino testified that he was aware that the Freedom Convoy did not pose a threat to national security as is required in the Act.

Previously redacted hand-written notes which were made public Tuesday indicated that Prime Minister Justin Trudeau’s national security and intelligence advisor Jody Thomas was aware on Feb. 14 – the day the Emergencies Act was invoked – that a Section 2 threat to the security of Canada was not met.

Commission counsel asked Mendicino, “were you aware that it had been concluded that Section 2 of the CSIS Act was not met?”

“Yes, I was aware that CSIS had concluded that Section 2 under the CSIS Act was not met. I was aware of that fact,” Mendicino responded.

In order for the government to be justified in invoking the Act, the government must first conclude that a threat to national security as defined by Section 2 of the CSIS Act is met.

Section 16 of the Emergencies Act states, “threats to the security of Canada has the meaning assigned by section 2 of the Canadian Security Intelligence Service Act.

“And law enforcement didn’t advise you they needed the Emergencies Act, did they?” Miller said.

“I had every reason to believe that law enforcement was supportive and requested the Emergencies Act through the tools that could only be granted through that statute,” Mendicino replied.

Prior testimony from RCMP Commissioner Brenda Lucki confirmed that Lucki had told Deputy Minister of Public Safety Rob Stewart via email that she was “of the mind that not all existing tools have been exhausted” by law enforcement prior to the invocation of the Emergencies Act.

“It is my understanding that CBSA did use the Emergencies Act powers to prevent two foreign nationals from entering into Canada…by invoking the act we were addressing a gap and what was necessary in those circumstances,” Mendicino said.

Despite it becoming clear from prior witness testimony that CSIS advised cabinet that the Freedom Convoy protest did not constitute a threat to national security as defined by the CSIS Act, Mendicino testified that public servants who “operate in the security and intelligence sphere did advise that the threshold had been met.”

Mendicino also said today that, “as you heard from CSIS, the threshold was met in the broader interpretation of the law.”

Commission counsel also asked Mendicino about how the government decided that the legal threshold was met to invoke the Act when CSIS concluded that the Freedom Convoy did not pose a threat to national security.

Mendicino maintained the position that just because the definition of a threat to the security of Canada wasn’t met, based on interpretation of the legislation, the government made the right decision.

“It was about looking at a protest which became illegal on a national scale,” Mendicino said. “The extraordinary jeopardy that it placed our economy in, the thousands of Canadians that had their jobs interrupted. The fact that businesses were shuttered, the fact that sectors were compromised. The fact that all of this was tied to a politically stated objective to overthrow the government if it refused to reverse course on pandemic policy.”

“Ultimately, for me, at the end of the day, it worked,” Mendicino said.

Prior to Miller’s cross-examination of Mendicino, Miller repeatedly clashed with Commissioner Paul Rouleau over his frustration that a decision to unseal previously redacted documents pertaining to Mendicino’s testimony had taken too long and that it had negatively interfered with his ability to cross-examine the witness.

Rouleau ejected Miller from the building – a first at the Emergencies Act hearings – before eventually allowing him to return to cross-examine Mendicino.

Miller spoke to the media outside of the building after getting ejected by Rouleau.

Miller was also the subject of a formal cease and desist letter sent Tuesday in regards to comments he made at Monday’s hearings.

He claimed that the unidentified man who was caught on camera holding a swastika flag and flying a Confederate flag at the Freedom Convoy was in fact veteran communications professional Brian Fox, who works at the prominent firm Enterprise Canada. It was also claimed that Fox was working alongside the federal government as part of some clandestine operation.

Lawyers representing Fox and Enterprise Canada said in the letter that Miller’s remarks were “high defamatory”. They state that Fox was not in Ottawa at any point during the time of the convoy and that, far from being a federal Liberal collaborator, is a longstanding member of the federal Conservatives.

“Your implication that Mr. Fox colluded with the incumbent government to discredit protesters has absolutely no basis in fact, and is reckless,” the letter states.

Chrystia Freeland and Justin Trudeau are scheduled to testify on Thursday and Friday respectively.