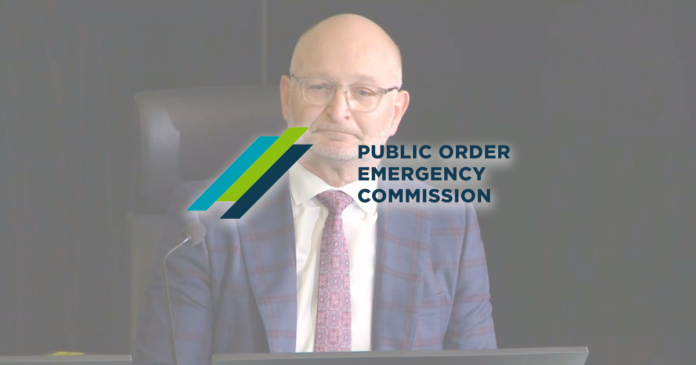 On Day 29 of the Public Order Emergency Commission hearings, Justice Minister David Lametti refused to answer questions about the Trudeau government’s decision to invoke the Emergencies Act by routinely citing solicitor-client privilege throughout his testimony.

Before Lametti took the stand, counsel for the Government of Canada informed the Commission that Lametti, who is also Canada’s attorney general, would not be answering any questions about what could be considered legal advice Lametti gave to cabinet regarding the Emergencies Act.

“I wanted to put on the record that the government continues to assert and maintain all of its claims of solicitor-client privilege,” Government counsel said.

“We will be objecting to and Minister Lametti will be refusing to answer all questions that would delve into areas of solicitor-client privilege.”

Commissioner Rouleau described the decision by Lametti to refuse to answer all legal questions as “an interesting maneuver.”

At the end of Lametti’s cross-examination, Commission lawyers stated that Lametti’s decision to refuse to answer questions put the Commission “in a conundrum.”

“We would observe that we have attempted to find a way to lift the veil that has made such a black box of what has turned out to be a central issue before the hearings,” Commission counsel stated.

“We just regret that it ends up being an absence of transparency on the part of the government in this proceeding.”

The central issue that Commission counsel refers to is the legal test that the government relied on to be confident that the legal threshold required to invoke the Emergencies Act was met. Throughout the inquiry, various witnesses confirmed that a threat to national security as defined by Section 2 of the CSIS Act was not met.

Commissioner Rouleau raised the issue with Lametti that there is a lack of understanding on the part of the Commission as to how to “assess reasonableness” of the invocation of the Act when the government is not forthcoming with its legal assessment of the decision.

“What I don’t know and I’m not saying we necessarily need to know is what was the belief of those who made the decision as to what the law was and I guess we just assume they acted in good faith and application of whatever they were told.”

Several text conversations between Lametti and his colleagues, including Public Safety Minister Mendicino, were introduced to the Commission as evidence.

A February 3 text conversation between Mendicino and Lametti shows Lametti urging Mendicino to “get the police to move” and to call in the military “if necessary.”

Lametti wrote to Mendicino, “You need to get the police to move. And the CAF if necessary.”

Mendicino responded back to Lametti, “How many tanks are you asking for?”

“I just wanna ask Anita how many we’ve got on hand,” Mendicino said, referring to Defence Minister Anita Anand, who testified Wednesday afternoon.

When asked to explain these messages, which inferred that Canada’s top prosecutor was considering calling in the military just five days into the Freedom Convoy protests in Ottawa, Lametti excused the comments as a joke.

“No. This exchange is meant to be a joke between two friends,” Lametti said. “The CAF is always the very last resort.”

When asked by Justice Centre for Constitutional Freedoms lawyer Rob Kittredge about this text exchange, Anand said, “I believe Minister Lametti has mentioned that that was made in jest.”

Kittredge asked Anand, “Do you think this is a joke?”

“I take no part of my role as Minister of National Defence as something in jest obviously,” Anand said. “I am very concerned to make sure that we are making decisions with full information and I know that is the case with Minister Lametti as well as the other colleagues around the table.”

The text exchange between Lametti and Mendicino also shows that Lametti felt people like former Bank of England governor and former Liberal cabinet minister Catherine McKenna – as opposed to “stupid people” – were looking to the government for “leadership.”

“People are looking to us/you for leadership. And not stupid people. People like Carney, Cath, my team…,” Lametti told Mendicino.

A text exchange between Lametti and Liberal MP Greg Fergus was also introduced to the Commission.

Fergus told Lametti on February 13 that the consensus between Liberal MPs after a caucus meeting was that there were three options available to the government: “1) Invoke the Emergencies Act, 2) Close down Coventry Road and Baseline bases of operations, 3) Put a solid RCMP or CAF spokesman in front of the press, since we politicians have pissed away our credibility.”

Lametti replied that there was no “solid RCMP spokesperson.”

Testifying after Anand was Omar Alghabra, the federal transport minister.

Deputy Prime Minister and Finance Minister Chrystia Freeland is scheduled to testify tomorrow morning, along with members of the Prime Minister’s Office including Chief of Staff Katie Telford.

Justin Trudeau is scheduled to testify on Friday.