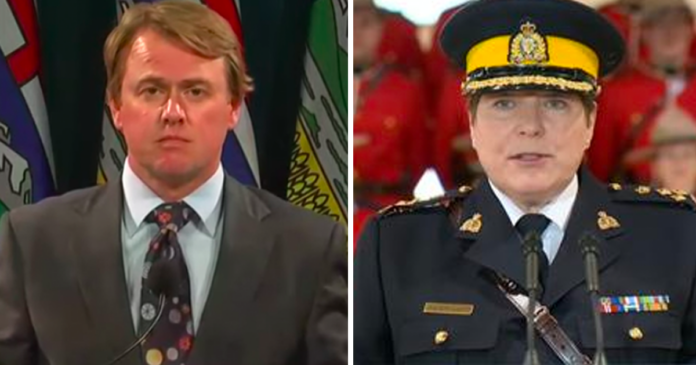 Shandro says Lucki has failed to provide accountability in two significant public inquiries. The Public Order Emergency Commission (POEC) which is investigating whether the federal government was justified in invoking the Emergencies Act, and the Mass Casualty Commission, an independent inquiry into the 2020 Nova Scotia mass shooting that claimed 22 lives.

Shandro said Lucki failed to provide accountability in both inquiries and did not prove to Canadians that RCMP leadership could make changes to ensure that errors of judgment would not happen again.

“Instead, commissioner Lucki, in sworn testimony, has dodged accountability and excused her actions,” he said in a statement.

“Over the past two years, commissioner Lucki has failed to deal with the RCMP’s history of systemic racism in a forthright and public manner, and has risked the integrity of an investigation into a mass shooting.”

“Further, as revealed last week, she failed to inform the federal cabinet of all law enforcement options available prior to the decision to invoke the Emergencies Act.”

While testifying at the POEC on Nov. 15, Lucki acknowledged that RCMP officers had the legal power to clear Freedom Convoy protestors without the Emergencies Act. But, she said she didn’t communicate the information in a meeting with Prime Minister Justin Trudeau just one day before he invoked the never-before-used Act.

Lucki admitted that, in hindsight, she should have communicated the information to the prime minister.

On Oct. 20, the Mass Casualty Commission published phone recordings of Lucki expressing frustration that the Nova Scotia RCMP would not publicly discuss weapons used to kill 22 individuals in the immediate aftermath of the massacre.

The recordings came amid allegations that Lucki was interfering with the Nova Scotia RCMP’s investigation into the massacre at the request of former public safety minister Bill Blair and the Prime Minister’s Office (PMO). An RCMP officer alleged that Lucki had promised Blair and the PMO that specifics on the guns involved in the shooting would be released to advance the Liberals’ gun control legislation.

Shandro said the commissioner must be held to the highest of standards.

“So far, Minister Mendicino has stood idly by while commissioner Lucki has failed to meet even the most meagre of standards for the past two years. This is an abrogation of the minister’s core responsibility to Canadians and must be rectified before the RCMP’s reputation as Canada’s federal police service is further damaged.”

Mendicino’s office did not immediately respond to a request for comment.