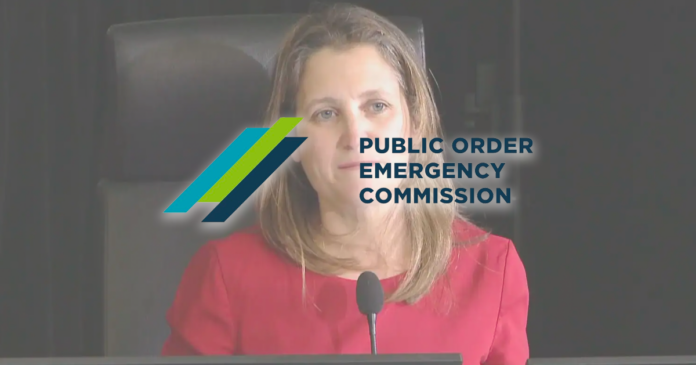 On Day 30 of the Emergencies Act hearings, disclosed documents revealed that at least one bank executive tried to caution Deputy Prime Minister and Finance Minister Chrystia Freeland against using the country’s banking system as a “political weapon.”

Meanwhile, during her testimony Freeland described the Freedom Convoy protesters as people who were trying to change policy at “gunpoint” and that she refused to negotiate with people who hold democracy “hostage.”

Commission lawyers asked Freeland to explain comments she made to an unknown person in a publicly disclosed transcript.

“Can you explain that comment? ‘We will never support negotiating with those who hold our democracy hostage’,” Commission lawyers asked Freeland.

“I think it’s pretty self-explanatory,” Freeland said. “I don’t think it’s healthy for any democracy for policy to be made at gunpoint, if you will,” Freeland told the Commission.

Chrystia Freeland also told the Commission that she felt Canada was a “powder keg.”

“I felt that Canada was sort of a powderkeg, and that you could have a violent, physical altercation at any point,” Freeland said.

In a redacted readout of conversations that Freeland had with bank CEOs on February 13, the bankers tell Freeland that because crypto currency platforms are unregulated, it is a challenge for the financial systems to do anything to stop the transfer of money into the hands of protesters.

Later in that conversation, the unknown banker tells Freeland that if you label the protesters as “terrorists” it would make the jobs of the banks easier to shut down the transfer of donated funds.

“I am told this is a public safety lead, but if you list them as people subject to sanctions (ie. as if they are terrorists) we could act swiftly,” the banker told Freeland on February 13.

Another banker on the same call cautioned the government about their attempt to use the banks to achieve a political goal.

“I am very concerned about seeing the banking system being used as a political weapon of the government. We can’t politicize the banks,” one banker told Freeland.

“If we are directed to close accounts, that could be seen by critics as the sector being used as an arm of the government.”

The banker then went on to point out to Freeland that the government needs to start talking about post-pandemic economics and that even though nearly 90% of the population was vaccinated, Canada had the toughest restrictions in the OECD. He also told Freeland that the government needs to show a plan for how to remove restrictions.

In publicly disclosed handwritten notes that Freeland was taking of her conversations, a note under the headline “Dave” shows that Freeland was once again discussing the possibility of using the label of “terrorist” to describe the Freedom Convoy.

The handwritten notes say, “you need to designate the group as terrorists.”

Convoy lawyer Brenden Miller asked Freeland who “Dave” was and Freeland refused to answer however she assured the Commission that she wasn’t talking to David Vigneault, the Director of CSIS, the group whose mandate it is to investigate terrorism organizations.

“Which Dave is in those notes? What’s Dave’s last name?” Miller then asks Freeland.

“I need to see my whole note book that you’re referring to. I can tell you for certain that I did not have a meeting with David Vigneault.

A text conversation between Stelco CEO Alan Kestenbaum and Freeland indicated that Kestenbaum was urging Freeland to drop the vaccine mandate for truckers.

“I know it sucks politically to reverse course and back down, but does it really pay to carry on a policy in support of a mandate for a vaccine that doesn’t stop the spread of omicron,” Kestenbaum wrote.

“I know this is a massive headache for you but it could be solved by retreating and letting it fade away.”

Freeland then described how seeing a young woman get honked at in Ottawa impacted how she viewed the situation on the ground in Ottawa.

“I walked past a parked truck, and there was a young woman there too and the truck honked really loudly. She shouted something not very nice and made an obscene hand gesture and the trunk honked again really loudly. I was really glad that I was there and that the RCMP was there,” Freeland said.

“It was this small young woman and this big truck and a person in it and she was mad. And I just thought there are dozens and dozens of these things happening every day and god forbid that one of them should actually flare into violence and physical harm.”

Next to testify were three senior staffers from the Prime Minister’s Office (PMO), Brian Clow, John Brodhead, and Chief of Staff Katie Telford.

Telford testified that many people were suggesting names of people who could engage with the protesters including Members of Parliament from different parties. Telford did not name these MPs. Telford said engagement with the protesters never became a real option because they did not know who to speak to about negotiations.

Lawyer Brendan Miller asked about the significant amount of redactions on notes from meetings with Telford and her Office Manager Sarah Jackson. Miller asked why notes were redacted without legal reasons. In response, Telford indicated that she could not recall the meeting Jackson made notes about.

A particular section of the notes were redacted through solicitor-client privilege. Miller asked if a lawyer was present during the conversation that the notes are referring to. Telford did not give a clear answer.

Testifying Thursday evening after the PMO staff was Kenneth Weatherill, the inspector general of policing at the Ontario ministry of the solicitor general.

Prime Minister Justin Trudeau is scheduled to testify tomorrow as the final witness of the Public Order Emergency Commission.