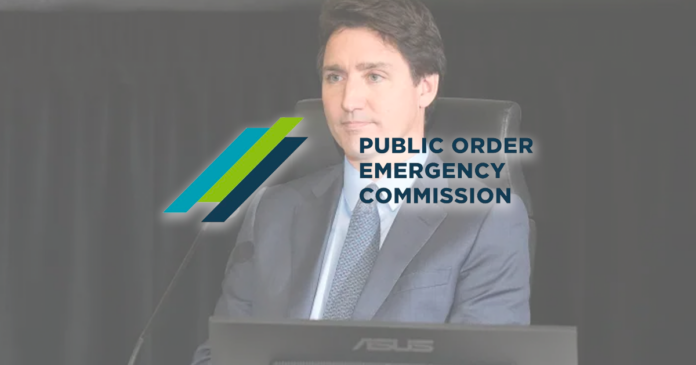 On the final day of the Emergencies Act hearings, Prime Minister Justin Trudeau gave a much-anticipated testimony where he defended invoking the Act and denied ever having called unvaccinated Canadians names.

The Prime Minister said that despite not reading the police plan signed off on by the RCMP to clear protesters using existing powers, he did not have confidence in the plan and decided to invoke the Emergencies Act anyways.

Under questioning from Canadian Civil Liberties Association (CCLA) lawyer Ewa Krajewska, Trudeau was asked about the plan that RCMP Commissioner Brenda Lucki had approved of on February 13 – one day before the Emergencies Act was invoked – to clear protesters from Ottawa using existing laws.

“We heard evidence from Commissioner Lucki of the RCMP that she had signed off on a plan to enforce and remove the protesters from Ottawa on February 13 that she was confident in. That she, the OPP (Ontario Provincial Police) and the OPS (Ottawa Police Service) had confidence in. Did you hear that testimony?” Krajewska asked Trudeau.

“No, I disagree with that,” Trudeau responded. “I do not believe that the plan that was either signed off on supposedly by the RCMP or presented by the OPS on the 13th was in any real regards an actual plan for clearing the protests.”

When asked if this was a plan that Trudeau actually read himself, he responded. “I was spoken to about it, I did not see it myself.”

Trudeau then said that despite not reading the plan himself, the federal cabinet “did not have confidence in it.”

Sujit Choudhry, counsel for the Canadian Constitution Foundation, brought forward the police plan, which was signed off on by Lucki to show Trudeau and the Commission. The document is heavily redacted – 4 pages of the 8-page plan are unreadable and blanked out from top to bottom.

“The rest of this document has been redacted so that’s page 4, page 5, page 6, page 7, page 8.” Choudhry said. “So Prime Minister, you said we should read this document. We can’t. It’s within your legal authority to instruct your counsel to remove these redactions. For the sake of the transparency of the commission sir, would you consider that request?”

Government lawyers immediately raised an objection stating that the question from Choudhry to seek transparency on behalf of the commission would put the Prime Minister “in an odious position.”

Choudhry responded to Trudeau, “You said we should read the plan, but I think you would agree that we can’t.”

“Indeed,” Trudeau responded. “Like I said, I haven’t read the plan but we’re in a situation where I have access to unredacted information and what I know and my understanding of this plan was that it was not a complete plan of engagement.”

While admitting that the threshold to declare a threat to national security as defined by Section 2 of the CSIS Act was not met and that CSIS Director David Vigneault did not have the legal requirements to investigate the Freedom Convoy, Trudeau remained resolute that using the Emergencies Act was the right decision.

When asked by Commission counsel if there was consensus among the Integrated Response Team – a group of senior civil servants and cabinet ministers formed to strategize a response to the Freedom Convoy – Trudeau testified that there was total consensus among the group for invoking the never-before-used Emergencies Act.

“There was consensus around the IRG table, there’s no question about it,” Trudeau said. “There was no voice saying ‘hold it, we don’t think you should do this.’”

Trudeau then confirmed that the CSIS Act threshold required for the agency to wiretap a Freedom Convoy organizer was not met, but that the threshold to declare a public order emergency was met.

Krajewska put to Trudeau, “when invoking the Emergencies Act, that threshold, the level of threshold of the security threat that must be met cannot be any lower than it is when CSIS is proposing to surveil one person. That the threshold is no different. Do you agree with that?”

“Yes I do,” Trudeau responded.

At the end of questioning from Commission lawyers, Trudeau’s defense of the Emergencies Act largely squared on the results of the invocation of the Act, not the legal test that the government relied on to make the invocation – something that has been hidden from the Commission by the federal government claiming solicitor-client privilege.

“We were able to solve the situation with it,” Trudeau said in reference to the invocation. “I’m not going to pretend that it’s the only thing that could’ve done it but it did do it and that colours the conversations we’re having now.”

“I am absolutely, absolutely serene and confident that I made the right choice in agreeing with the invocation,” Trudeau said.

Under questioning from Convoy lawyer Eva Chipiuk, in response to listening to Canadians describe their feelings about the Freedom Convoy protest and the difficulty that Trudeau’s public health restrictions and mandates placed on their lives, Justin Trudeau told the Commission that he “wished he could do more to convince people to get vaccinated.”

When confronted by Chipiuk about his comments that he made about unvaccinated citizens in a September 2021 french-language interview in which he called unvaccinated Canadians “racists,” “misogynists” and “extremists,” Trudeau told the Commission that he has “never called the unvaccinated names.”

After the Prime Minister’s cross-examination, counsel presented their closing arguments to Commissioner Rouleau.

Convoy lawyer Chipiuk used her closing arguments to call on Canadians to hold the political executive to account for invoking last-resort, never-before-used Emergencies Act on the Freedom Convoy protest.

“Let this inquiry be the starting point for all Canadians and that means all Canadians including government leaders to hold the executive branch of Canada to account. If there ever was a time for a Prime Minister to step down, now is that time,” Chipiuk concluded.

Government of Canada lawyers concluded the hearing by telling the Commission that the invocation of the Emergencies Act was justified given that it had the support of several provincial and territorial leaders, that the measures taken were “proportional, effective, time-limited and Charter compliant.”

They also stated that the measures were of “significant benefit” to law enforcement in deterring and dissipating “the illegal protests in Ottawa, Windsor and Winnipeg.”

Closing remarks from the Canadian Constitution Foundation focused on the government’s broad determination of the Emergencies Act to reach the legal threshold in order for their decision to be justified.

“It is simply not enough, as a matter of law, to say that the cabinet relied on a broader set of inputs to reach its decision,” Choudhry said.

“The invocation of the Emergencies Act has been and should remain to be exceedingly rare. But now that the glass has been broken on the Act, it can be used again. When the Commission asks hard questions on the use of the Act in 2022, it must also focus on the Act’s potential misuse in the future and protect the right to protest, parliamentary democracy and federalism.”

Hearings have concluded. The next phase of the Commission begins on Monday as nearly 50 experts chosen by the Commission will commence a series of round-table discussions to assist the Commissioner in making recommendations for policy change in the future which will be used in the Commissioner’s final report.

You can read more about this next phase of the Commission here.