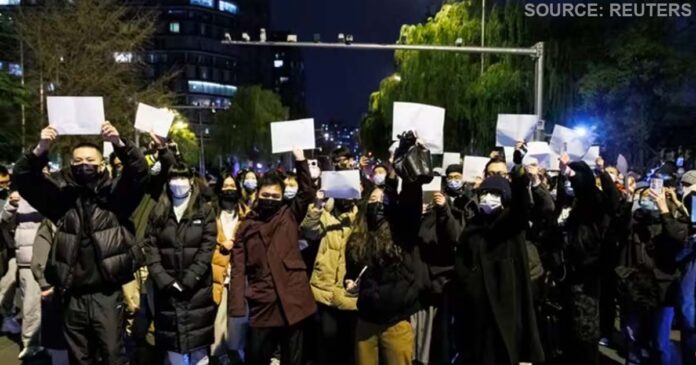 On Tuesday Prime Minister Justin Trudeau broke his silence on the ongoing protests in China, saying he supports the rights of Chinese citizens to “express themselves” as the communist regime in Beijing faces widespread protests over its extreme Covid-19 lockdown measures.

But Trudeau is also facing criticism for not showing the same tolerance for the trucker convoy protests that took place in Ottawa earlier this year.

“We’re going to continue to ensure that China knows we’ll stand up for human rights, we’ll stand with people who are expressing themselves.”

In China, many thousands of protesters took to the streets in at least eight major cities after a fire killed people locked down in their homes in Urumqi.

Last week, the prime minister testified before the Public Order Emergency Commission on his use of the Emergencies Act to stifle Canada-wide Freedom Convoy protests opposed to the Liberal government’s Covid-19 mandates and travel restrictions.

During his testimony, Trudeau claimed that he found it troubling that protesters in Canada were demanding changes in public policy before he invoked the emergency powers.

“Using protests to demand changes to public policy is something that I think is worrisome,” said Trudeau.

Political advisor and conservative commentator Stephen Taylor asked on Twitter whether Trudeau was “a hypocrite” for his stance on the matter.

Other world leaders, including British Prime Minister Rishi Sunak offered condemnations of China’s crackdown on its own citizens.

“We recognize China poses a systemic challenge to our values and interests — a challenge that grows more acute as it moves towards even greater authoritarianism,” said Sunak.

“Instead of listening to their people’s protests, the Chinese government has chosen to crack down further, including by assaulting a BBC journalist.”