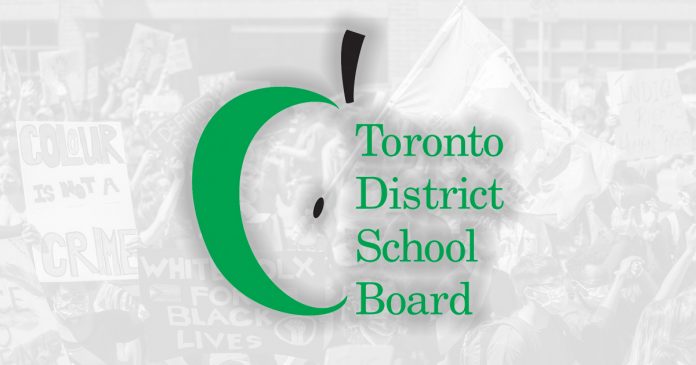 In the summer of 2017 I sat beside activist Desmond Cole at the Toronto police services board meeting as he and members of Black Lives Matter tried to bully the board into getting rid of the successful cops in schools program.

A long list of teachers and students from across the Toronto District School Board (TDSB) appeared that day to relay their positive experiences with the program.

One former York Memorial student bravely told the meeting that certain black students don’t like police officers because of the “whole gang related stuff going on.”

A subsequent $30,000 review of the Student Resource Officer (SRO) program found the majority of students, staff and parents surveyed reported that cops in schools made them feel safer. Many said they were less worried about bullying, drugs, weapons and vandalism with an SRO in their schools.

Yet the politicians and trustees, including Mayor John Tory, took a knee to the activists — believing their mantra about students being “marginalized” by the cops.

Since the program was cancelled nearly five years ago, there has been a steady decline in the quality of life in many TDSB high schools, culminating in a rash of deadly shootings and stabbings this fall.

In the past year with activist education director Colleen Russell-Rawlins and her caring and safe schools/anti-oppression/anti-black racism/hug-a-thug agenda in existence, there are few consequences for bad behaviour.

Suspensions and expulsions are virtually non-existent and violence is ignored to the point where teachers have walked off the job at York Memorial Collegiate — according to recent reports — fearing for their safety from almost daily fights in the hallways and an actual fight club in the school’s hallways.

School administrators are left to helplessly watch as inmates run the asylum.

Over the years, Toronto city officials have thrown more than $300 million at poverty and youth equity programs – to convince youth not to turn to violence and the gun – with absolutely no accountability for the dollars spent.

In late 2018, then minister of border security and organized crime reduction Bill Blair tossed another $7-million down the drain on social programs to tackle youth violence in Toronto.

With accountability virtually non-existent it is clear none of these programs have worked and have only permitted those in the poverty industry to grow their ranks.

One would think that at this point, it’s time to admit these measures have not tackled the epidemic of violence.

It should be obvious to our politicians and Toronto school board trustees that thugs, gang members and drug dealers are not interested in summer jobs, community centre activities and basketball courts.

But the politicians refuse to admit they’ve made a big mistake cancelling the cops in schools program.

So this week Toronto mayor John Tory released a statement – after meeting with TDSB education director Russell-Rawlins and chair Rachel Chernos-LIn– indicating they’ve decided to prioritize schools that need “enhanced youth programming”, mental health supports and more free breakfast programs. They also intend to better partner with community organizations (the same that have achieved very little to nothing over the past five years).

Russell-Rawlins and Chernos-Lin released their own statement indicating that they will create a Safe Schools Audit team to work with schools to ensure Caring and Safe schools policies are being followed, that they will ensure every high school has a student safety engagement team and will add more safety monitors, social workers and youth counsellors to schools.

As I said, these political decision makers represent the best definition of insanity.

It’s sad to think they can’t admit their solutions aren’t working and that by giving in to the BLM/defund the police activists and promoting their hug-a-thug programs, they’ve created a crisis.

So much so that violent crime is becoming a weekly and sometimes daily event at Toronto high schools. On Thursday, there was another lockdown of a Scarborough school following reports of a person with a gun inside the premises.

On Monday, the TDSB is having an emergency meeting to discuss school violence. Sources say some trustees will recommend returning cops to some TDSB schools.

Just this past week Vancouver’s school board voted to bring back cops to a select number of high schools–a campaign promise of new mayor Ken Sim. They were ousted in April of 2021.

If Vancouver’s politicians can reverse course, so can Toronto.

Unless saving face is more important to Toronto’s politicians than saving lives.