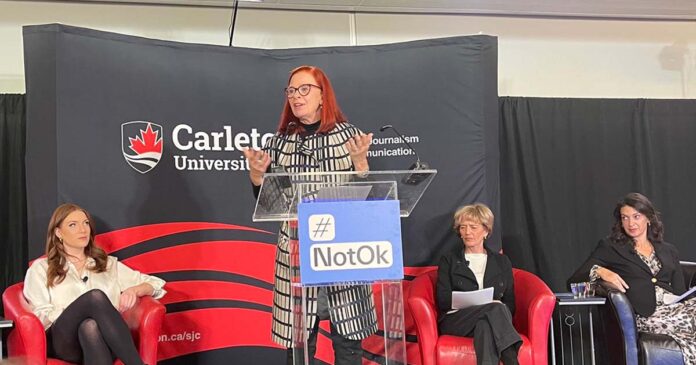 A group of journalists gathered Thursday evening for a public discussion at Ottawa’s Carleton University to discuss what they describe as a rise in online hate targeting journalists.

Carleton’s Journalism Program head Allan Thompson opened the event and did an Indigenous land acknowledgement, in which he called himself a “fifth generation settler” and said journalists should commit to challenging and dismantling “white supremist colonial mindsets.”

The latter was followed by a brief address by Napier, and then remarks by Tait. The CBC president stated that the internet is a dangerous environment for journalists. She added that the sole purpose of attacks against journalists is to silence them, something that undermines democracy. CBC has launched the #NotOk initiative to bring attention to the issue.

Tait also said that CBC has been pressuring social media companies to quickly remove “toxic messages”, and added that they are working on ways to prevent those messages from being sent in the first place.

Furthermore, she said that law enforcement should treat online abuse as a cybercrime, called for legislation, penalties as well as for societal change.

Some of Tait’s remarks were echoed by Verma. Global’s EIC also said that amid online platforms being a toxic hotbed for hate, her outlet does not require its journalists to be on social media.

However, Ifill said it is not possible for freelance journalists to not be on social media. “This idea that (freelancers) can make this choice to just step away from the noise is ludicrous, it does not reflect an intersectional look at media today,” she said. She also said she wished the panel had been more intersectional, and that people most likely to freelance are racialized and LGBT.

Eitizaz, who participated remotely, noted that social media violence is connected to real violence. She also said that the onslaught of exhaustive online hate began in the fall of 2021, shortly after People’s Party of Canada leader Maxime Bernier tweeting that people will “play dirty” with journalists.

She added that journalists should not be left to carry a burden of hatred. Later on, Eitizaz said that the group Diagolon has legitimized violence towards journalists.

Eitizaz also noted frustration with reporting online abuse to police, a frustration that was also shared by Ifill and Gilmore. The latter noted the police reporting process is lengthy and often results in cops saying complaints do not equate to a threat under the Canadian Criminal Code.

Ifill noted it was problematic that an hour into the panel, the far-right had not been brought up. She said a source of the hate received has been the journalism done on the far right and its rise. She added that “convoy people, convoy adjacent people, and white supremacists” are part of the problem.

Later in the evening, Ifill called out media outlets’ diversity policies, noting a lack of voices. She also said that when she is seeking an expert opinion for a story, she does not interview white men because she wants to change the perception of expertise and challenge power.

She also said that minorities did not and often still do not have a voice in traditional media structures – citing the media’s coverage of Queen Elizabeth II’s death as an example. Ifill said that individuals like her, who were glad that the queen died, were not given a voice – despite the promises made after the death of George Floyd.

Eitizaz noted that the “fake news narrative” has created problems for journalists. She also brought up a controversial Toronto Star cover from Aug. 2021 that featured a series of hateful messages towards people who had chosen not to take the Covid-19 vaccine.

She said a page designer was behind the cover, but the matter led to the original article being taken out of context. The journalist who wrote the story was then subject to hate. “To this day, that haunts us,” she added.

In response to a question from the audience about online gaslighting being considered a form of harassment, Gilmore said that when Blacklock’s Holly Doan tweeted out about tonight’s talk, people were laughing about it.

She also said Rebel News’ David Menzies was brushing off the hate she is receiving as “mean tweets” amid her being told she is on a hitlist – something that has caused her to have to look over her shoulder when she is walking her dog. “Is that a mean tweet? I don’t think so,” said Gilmore.

Ifill added that the way the word “woke” is being used has been “gaslighting to the max”. She said wokeness comes from black liberation movements, but has been manipulated to gaslight people out of fighting for social justice.

In response to a question on the impacts of online hate, Gilmore said she thinks the situation is unfair because white men do not have to deal with the daily havoc she goes through. She also said medication and mental health care has made it easier for her to cope with the hardships she has been dealing with.

Mendicino expressed gratitude for journalists like Ifill, Gilmore and Eitizaz. He called the attacks against them racist, misogynistic, and criminal, adding that they are done on purpose by people who want to preserve or bring back to a “delusional sense” of status quo. He also said action has to be taken to make online spaces safe.

It should be noted that a Nov. 2021 Ipsos survey conducted among Canadian journalists found that 72% say they experienced harassment of some form during the past year, with 65% saying it occurred online. Women journalists and journalists of colour say they have been particularly hit hard by the online hate.