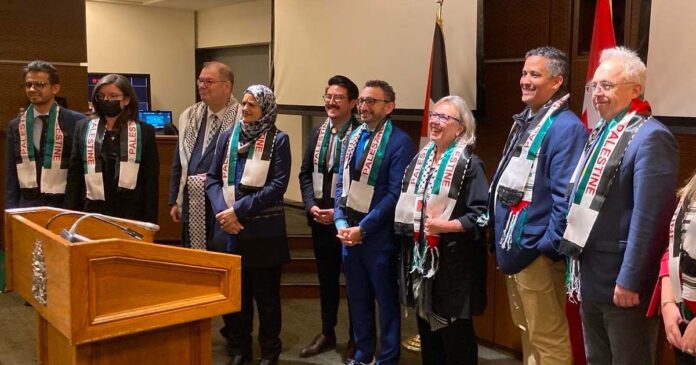 Now, it would not be a stretch to think that a gathering of the Canada-Palestine Parliamentary Friendship Group, this one chaired by Liberal MP Salma Zahid, just might attract an antisemite or two.

The surprise is that Nazih Khatatba — a notorious antisemite and Holocaust denier — and others from his Meshwar Media group, were invited to Parliament Hill for what was described as a “solidarity ceremony.”

And no one is ‘fessing up to creating that particular guest list.

The presence of Khatatba, the publisher of an Arabic-language newspaper in Toronto, at last week’s event, attended by several MPs including Green Party leader Elizabeth May, sparked an exchange between Conservative MP Melissa Lantsman and Transport Minister Omar Alghabra.

Lantsman, in the House of Commons, called on Alghabra to denounce the publisher and his publication and apologize to Canadians.

Alghabra said on Twitter that the publisher should not have been invited, denounced all forms of antisemitism and encouraged MPs from all parties to do the same.

Lantsman, a rookie MP, was named to the Tories’ shadow cabinet on Nov. 9, as official opposition critic for the transportation file. She’s one of only two Jewish Conservative MPs elected in the 44th Parliament — along with Winnipeg’s Marty Morantz, from Winnipeg.

Meshwar Media has a history of anti-Semitism, having referred to the Holocaust as the “Holohoax” and “the biggest lie in history.”

In 2015, the newspaper called Judaism a “terrorist religion,” in which killing is ingrained, while having been known to speak positively about Palestinian terrorists.

The media outlet praised the 2014 synagogue massacre in Jerusalem’s Har Nof neighborhood, in which Canadian Chaim Rotman was murdered, as “courageous.”

On October 23, Khatatba posted a video to Facebook which promoted the lie that Jews are plotting an international conspiracy of world domination, and which included a clip of Nazi leader Adolf Hitler as proof of this claim.

In a written statement to  the Canadian Press, Khatatba says he was indeed invited to attend by Palestinian organizations but denied perpetuating antisemitism and Holocaust denialism.

That said, a spokesman for the event’s chair says it is “carefully” reviewing how it handles events after Khatatba showed up.

Afterwards, however, both B’nai Brith Canada and the Centre for Israel and Jewish Affairs took to social media to say it was reprehensible that Khatatba was allowed to attend.

In question period in the House of Commons, Lantsman, who is also the Tories’ deputy leader, called Khatatba a “dangerous antisemite, Holocaust denier and a terrorist sympathizer.”

Parliamentary friendship group chair and Liberal MP Salma Zahid issued a statement saying invitations for the event were sent around the local Palestinian community and “we are not able to research the history of every attendee that responded.”

Zahid’s spokesman Jeff Jedras says neither their office nor the parliamentary group invited Khatatba, but added “we will certainly review carefully how we handle future events with outside attendees.”

In his statement, Khatatba said his newspaper is “not antisemitic, and we have never spoken badly about Jews in Canada or other countries. Rather, we criticize the Israeli occupation policy and stand by the Palestinian people.”

On Friday, B’nai Brith Canada called on Zahid to distance herself more firmly from Khatatba and his publication.

“Salma Zahid has a special obligation, particularly in her capacity as chair of the Canada-Palestine Parliamentary Friendship Group, to reject Meshwar Media and its publisher by name,” CEO Michael Mostyn said in a statement.

“Zahid owes it to the public to better explain through what channels Khatatba gained access to the event on Parliament Hill. Zahid must commit her Friendship Group to end all association with those who distort the Holocaust and pursue antisemitic agendas.”

In response, Jedras said Zahid’s office had nothing more to add.