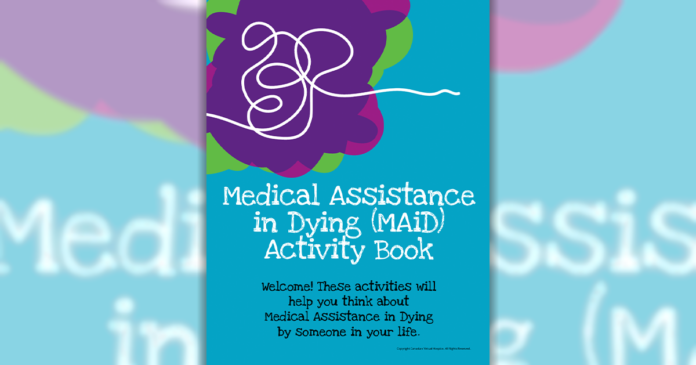 Canadian Virtual Hospice first published the booklet in July in order to prepare children who have someone in their life who may have chosen Medical Assistance in Dying (MAiD). Topics in the booklet include defining MAiD, who is eligible and how it is administered to a patient.

“A person can only have MAiD if they are at least 18 years old,” it reads. “And if they have a serious illness or disability that hurts their body or their mind so much that it feels too hard to keep living.”

“The person having MAiD will get three different medicines. They are usually given in an IV. Then the needle is taken out and the straw can be used to send medicine straight into a person’s body in their blood,” describes the booklet.

The booklet continues by describing how lethal injection works: “The first medicine makes the person feel very relaxed and fall asleep. They may yawn or snore or mumble. The second medicine causes a “coma.” A coma looks like sleep but is much deeper than regular sleep. The person will not wake up or be bothered by noise or touch. The third medicine makes the person’s lungs stop breathing and then their heart stops beating.”

In a section titled: “What if I (or someone else) don’t want them to have MAiD?” the booklet writes: “MAiD is a personal choice. That means that no one can decide for another person. Each person has to decide for themselves.”

The booklet also suggests children to “Draw or write about your ideas and feelings about the person in your life who is choosing MAiD.”

Doctor-assisted suicide was legalized in Canada in 2016 for limited situations, but is expanding at an alarming rate.

In an interview with True North, the Executive Director of Canadian Physicians for life Nicole Scheidl said the booklet’s approach was “insidious.”

“The authors suggest that euthanasia is a medical practice and that medicine is used to euthanize a person,” said Scheidl. “Euthanasia is not medical treatment. It is what happens when medicine fails.”

On top of that, Scheidl says the booklet does not accurately describe how euthanasia drugs work and that it “glosses over the issues raised by the drugs used.”

“The entire booklet is focused on normalizing euthanasia as the best way to die.” said Scheidl.

“The medical evidence is overwhelming that determining whether someone will recover from mental illness is impossible to predict. Psychiatrists report that individuals who are suicidal are now no longer accepting treatment as they are waiting for the March expansion of euthanasia.” said Scheidl.

“When someone is suicidal, they can’t see the light at the end of the tunnel. We should help them towards the light, not facilitate the ending of their lives,” Scheidl continued.

When asked about what Canadians should know about doctor-assisted suicide, Scheidl replied, “Practitioners are offering assisted suicide to individuals whose motivations are driven by social concerns like loneliness, poverty, and abandonment. Even though the law does not accept this as criteria, it is happening. And of course, we are only seeing some of the many stories being reported in the media.”

Last summer, an official with Veterans Affairs Canada brought up doctor-assisted euthanasia with a veteran who was seeking treatment for mental health issues. The veteran, who wished to remain anonymous, was told to see doctor-assisted suicide without prompt.

In a special joint committee on MAiD in October, Dr. Louis Roy from the Quebec College of Physicians suggested parents would one day be able to request assisted death for babies.

The revised legislation on MAiD became law on March 17, 2021 which expanded eligibility to individuals whose death is not reasonably foreseeable.

Doctor-assisted suicide will expand and become legal for those struggling with mental illnesses starting in March 2023. The government has delayed the expansion in order to consider recommendations from expert panelists working with the provinces.