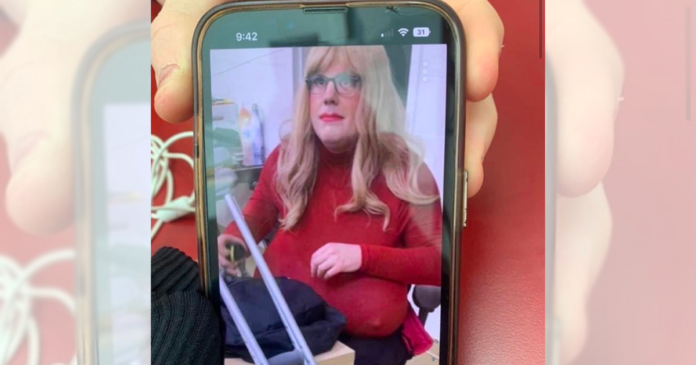 Decorum may soon be returning to Halton District School Board classrooms.

At a special meeting last week, trustees approved a request to education director Curtis Ennis to craft a professionalism policy for teachers which includes a requirement to “maintain appropriate and professional standards” of dress in the classroom.

The report is due March 1, with an interim report expected next month.

This is, of course, directed at the situation with trans teacher Kayla Lemieux, who has come to class since September sporting mammoth prosthetic breasts and tight tops with her fake nipples showing.

Lemieux, a shop teacher, started out in the fall wearing this obscene and unprofessional outfit to class at Oakville Trafalgar High school.

But since the story made headlines south of the border and as far away as Britain, she’s been moved from school to school and class to class as a fill-in teacher escorted into school by police guard.

Ennis, a transplant from the Toronto District School Board, has responded like a deer caught in the headlights, unable or unwilling to address the concerns of many parents.

If that wasn’t preposterous enough, in November the trustees approved a ridiculous report from HR superintendent Sari Taha indicating that a formal or professional dress code and grooming standards would be likely to expose the board to “considerable liability.”

The report claimed professionalism must be balanced with a culture of respect, equity and inclusion and that employers need to allow employees to express themselves according to their “lived gender.”

In other words, they were concerned about a lawsuit and not about the kids being exposed to this caricature of a drag performer.

Lemieux’s outfit is not only outlandish but mocks women. No woman in her right mind would dress like she has – whether to school or the office.

Education Minister Stephen Lecce, no doubt hounded by complaints from parents threatening a lawsuit, at long last spoke up just before the Christmas about Lemieux’s highly unprofessional classroom garb.

He indicated that when teachers are in front of kids, they should be expected to “uphold the highest standards of professionalism.”

The trustees likely saw the writing on the wall and that led to last week’s motion.

One can only hope that Ennis and Taha produce something of substance this time instead of the November report, a pathetic attempt to pander to woke trans activists.

It’s time to show some leadership and return some decorum to a board that has become an international laughingstock.